The 1980 World Series matched the Philadelphia Phillies against the Kansas City Royals, with the Phillies winning in six games to capture the first of two World Series titles in franchise history to date.

It is remembered for Game 6, which ended with Tug McGraw striking out Willie Wilson at 11:29 p.m. Wilson set a World Series record by striking out twelve times (after getting 230 hits in the regular season) in the six-game set. The Phillies became the last of the original AL and NL franchises to win a World Series title.

Seventy-seven years after the inaugural Fall Classic, only one original team remained without at least one World Championship title. That club belonged to Philadelphia and despite winning National League pennants in 1915 and 1950; the Phillies were still waiting to go the distance after ninety-eight seasons. Their opponents, the Kansas City Royals weren't strangers to second place either. One step away from World Series appearances in '76, '77 and '78, both teams had suffered heartbreaking losses in three consecutive Championship Series. After losing all three American League versions to New York, Kansas City swept the perennial champions in 1980 after a three game playoff series. Throughout the 1970's, both ball clubs had come up short time and time again and it was fitting that they both reached the summit concurrently to face one another in baseball's most coveted contest.

As Game 1 opened at Veterans Stadium, Royals veteran Amos Otis nailed a two run homer for his first Series at-bat and teammate Willie Aikens followed with a one on blast of his own. Dennis Leonard (a twenty game winner) took the mound in the bottom of the inning tasked with protecting the 4-0 lead, but Philadelphia erupted with a five run blitz that included a three run homer by Bake McBride. Then the National League champions scored two more over the next two innings with Bob Boone delivering his second run-scoring double and Garry Maddox adding a sacrifice fly. Aikens answered back with his second, two run homer of the night in the eighth, but the comeback Phillies were still left clinging to a 7-6 lead. Tug McGraw came in as relief over Bob Walk in the final inning and managed to hold off the Royals for three quick outs and the opening game win.

Once again, the Vet belonged to "the vet" as Otis knocked a two run double off Phillies standout Steve Carlton for the 3-2 lead in the seventh inning of Game 2. John Wathan followed and proceeded to send the Royal workhorse home with a sacrifice fly as Dan Quisenberry was sent in to protect the lead. Working in relief of Larry Gura, Quisenberry sent the first three Philly batters back to the bench, but ran into trouble in the eighth. Surrendering four hits (resulting in four runs) the Kansas City ace watched his team's lead vanish thanks to McBride (who singled home the tying run) and Mike Schmidt (who doubled his team ahead). Ron Reed was sent in from the home team bullpen in the ninth and held onto the advantage for a 6-4 victory.

Adding to the Royals 0-2 frustrations was the untimely removal of standout George Brett, who had almost caught Ted Williams' record of .400 during the regular season but came up just short (in true Royals fashion) at .390. The All-Star third-baseman was suffering from an acute case of hemorrhoids, and was immediately scheduled to undergo minor surgery. After leaving the hospital on the day of Game 3, a pain-free Brett returned to the diamond and removed all doubts with a first inning homer off the Phillies' Dick Ruthven. Both teams continued to trade runs (including another home run by Otis) and at the end of regulation, the scoreboard read 3-3. Kansas City was determined to prevent another Philadelphia comeback and Aikens came through in the bottom of the tenth with a two out single that scored Willie Wilson for the 4-3 triumph. The multi-talented first baseman had continued to come up clutch with a two run homer in the Royals' first and a bases empty shot in the second. The two drives made Aikens the first man in history to connect for a pair of two-homer games in one Series.

In Game 4, a rejuvenated Royals team held the Phillies to a 0-0 tie going into the fourth and for the first time in the tournament, prepared to take the lead. After Schmidt broke the tie by depositing a Gura pitch over the wall for a two run advantage, Kansas City answered back with some fancy "woodwork" of their own. Brett "got the ball rolling" and took rookie Marty Bystrom for a RBI groundout in the fifth. Next, Otis added a third homer to his stats and finally, U.L. Washington nailed a sac-fly for the 3-2 lead in the sixth. Gura struggled in the seventh with a two-on, one-out situation, but Quisenberry came to his rescue and maintained the one-run decision going into the ninth. Down again, but far from out, the Philadelphia line-up decided it was their turn to repeat history. First, Schmidt led off with a single and pinch-hitter Del Unser brought him home with a double. After Keith Moreland sacrificed Unser to third, Maddox grounded out holding him on the bag. Manny Trillo followed with a line drive off Quisenberry's glove and Unser sped home for the go-ahead run. Philly's McGraw continued his inconsistency on the mound after issuing three walks in the bottom of the ninth, but Royal Jose Cardenal fanned for three and the final out of the game.

Carlton (a twenty-four game winner) was handed the ball for Game 6 and responded with an early lead thanks to Schmidt's two RBIs in the third. Despite plans for a complete game, the Philly ace was pulled in the eighth after stumbling down the stretch and allowing the first two Kansas City batters to reach base. Despite his previous outing, McGraw was called again and managed to load the bases three times in the last two innings while surrendering only one run. As the Royals loaded the bases with one-out in the ninth, the left-hander induced Frank White to hit a high foul pop near the Philly dugout. As catcher Bob Boone drew under it, the ball bounced in and out of his mitt. Luckily, first baseman Pete Rose was also giving chase and narrowly grabbed the disastrous deflection protecting the 4-1 triumph. Not only had White failed to bring home a single base runner in his final at-bat, but Willie Wilson followed him only to be struck out for the twelfth time — a humiliating Series record. "Runner-Up" was familiar territory for the Kansas City franchise, while Philadelphia had finally brought a title home to The City of Brotherly Love after almost a centennial of trying. 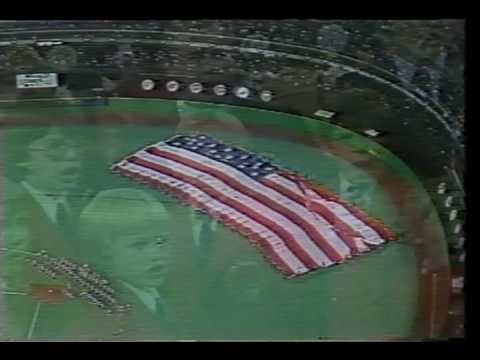