Asteroids is a video arcade game released in 1979 by Atari Inc.

It was one of the most popular and influential games of the Golden Age of Arcade Games. Asteroids uses vector graphics and a two-dimensional view that wraps around in both screen axes. The player controls a spaceship in an asteroid field which is periodically traversed by flying saucers. The object of the game is to shoot and destroy asteroids and saucers while not colliding with either, or being hit by the saucers' counter-fire.

The game was conceived by Lyle Rains and programmed and designed by Ed Logg. Asteroids was a hit in the United States and became Atari's best selling game of all time. Atari had been in the process of releasing another vector game, Lunar Lander, but demand for Asteroids was so high they stopped further production of Lunar Lander so they could begin building Asteroids. The first 200 Asteroids machines were sent out in Lunar Lander cabinets. Asteroids was so popular that video arcade owners sometimes had to install larger boxes to hold the amount of quarters that were spent by players.

Asteroids is also the first game to use Atari's "QuadraScan" vector-refresh system. A full-color version known as "Color-QuadraScan" was later developed for games such as Space Duel and Tempest. 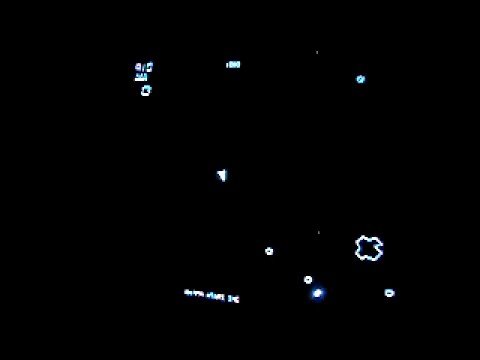