Joe's Garage: Acts I, II & III is a 1979 rock opera by Frank Zappa, which tells the story of what could possibly happen if music was made illegal.

The album features Ike Willis as the voice of "Joe", a stereotypical garage band youth who unwittingly journeys through the miasma of the music business. Zappa provides the voice of the "Central Scrutinizer" character—a mechanical voice that narrates the story and haunts Joe's psyche with McCarthyistic 50s-era discouragement and "scrutiny."

Joe turns to religion for help, and "pays a lot of money" to "L. Ron Hoover" at the First Church of Appliantology (a parody of The Church of Scientology). There, Hoover identifies Joe as a "latent appliance fetishist". When Joe asks if he should "come out of the closet" he is instead instructed to "go into the closet" to achieve "sexual gratification through the use of machines". In the next song, we learn "The Closet" is the name of a club where humans can copulate with appliances. Joe locates a machine he likes, named Sy Borg, and they return to Sy's apartment. There Joe and Sy have a "groovy orgy" with Sy's roommate, a "modified Gay Bob doll."

Joe ends up destroying Sy (whom the Central Scrutinizer calls an "XQJ-37 Nuclear-Powered Pansexual Roto-Plooker") with a golden shower. Joe, who gave all of his money to the Church of Appliantology and is thus unable to pay for the damage, is thrown into a special prison. The prison is painted all green on the inside and filled with criminals from the music business. While in jail, Joe is repeatedly gang raped ("plooked") by former musicians and record executives when they're not snorting lines of detergent. This gang is led by a shockingly endowed former promotional agent of a major record company, known as "Bald-Headed John: King of the Plookers".

When Joe is released from prison, music has become illegal. He loses his sanity, and begins imagining all the guitar notes he cannot play while a journalist documents his thoughts. Eventually, he comes to terms with the fact that music is gone, and gets a job at the Utility Muffin Research Kitchen, frosting muffins. The Central Scrutinizer then goes on to say that if Joe's story wasn't enough to convince the listener that music was evil, he decides to sing the last song in his regular voice. He then shuts off his contraption and his real voice is Frank Zappa's. 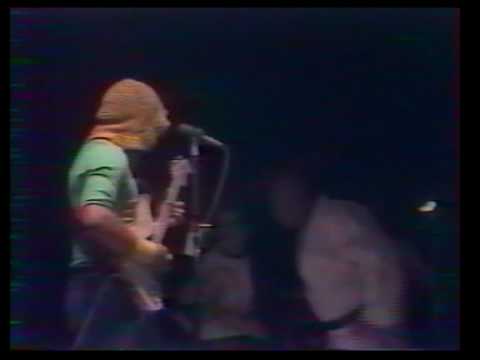