The 1978 Stanley Cup Final championship series was contested by the Boston Bruins and the defending champion Montreal Canadiens, making their third-straight appearance.

The series was a rematch of the 1977 final. The Canadiens would win the best-of-seven series four games to two, to win their third consecutive Stanley Cup.

Defenceman Larry Robinson of Montreal led all players with 17 assists, and finished tied with teammate Guy Lafleur with 21 points, to win the Conn Smythe Trophy.

As in the 1977 postseason, the Canadiens were the team to beat. Once again no other squad was able to prevail as Montreal won night after night, en route to the team’s third straight Stanley Cup.

Given a bye for the first round, the Habs entered the playoffs against Detroit in the quarterfinals. Outscored 24-10, the Red Wings managed only a single win in the five games it took for Montreal to move on to the semifinals.

Their semifinal opponents from Toronto featured two 40-goal men, Lanny McDonald and Darryl Sittler as well as Borje Salming on the blue line, all future Hall of Famers. The Canadiens needed just four games to sweep their way into the Finals for the third straight spring.

In yet another parallel with the events of a year earlier, Montreal faced Boston in the Stanley Cup Finals. A well-balanced club with an NHL-record eleven 20-goal scorers, the Bruins put up more of a fight than they did in 1977.

Guy Lafleur posted three points in the opening game, a 4-1 Canadiens victory. He also put the next game to bed thirteen minutes into the extra frame, notching the OT winner.

Playing in front of a friendlier crowd, Gerry Cheevers posted a 4-0 shutout in the third game and Gary Doak broke a 3-3 deadlock in overtime in the fourth to tie the series.

Back at the Forum, the Habs regained control with a 4-1 victory and then returned to Boston to complete their 13th straight playoff series victory over the Bruins, winning the game 4-1 with Mario Tremblay’s first period marker standing as the Stanley Cup winner. 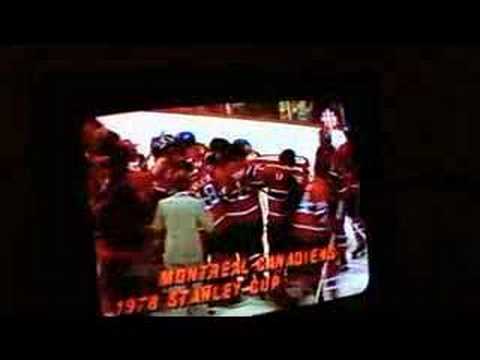