Billy Sims of The University of Oklahoma became the sixth junior to win the coveted Heisman Memorial Trophy Award.

Sims was the nation's leading rusher and scorer for 1978, averaging 160.1 yards and 10.9 points. He set the Big Eight Conference single season rushing record of 1,762 yards on 231 carries for a phenomenal average of 7.6 yards every time he touched the ball. Sims was the only back in the nation's top 50 to average 7.0 per carry, and became the first player in Big Eight history to rush for more than 300 yards in three straight games. Sims compiled these statistics in only one full season of play-injuries kept him out of play in his freshman year, and most of his sophomore year as well. In 1978, Sims was the Associated & United Press College Player of the Year; he was also consensus All-American, Walter Camp Foundation's Player of the Year, and Sports Magazine's Player of the Year. Billy was inducted into the Oklahoma Hall of Fame in 1994. He is now retired from the NFL.

Billy was elected to the National Football Foundation and College Hall of Fame in 1995.

Billy Sims (born September 18, 1955 in St. Louis, Missouri) is a former college football and NFL running back. He won the Heisman Award and the Davey O'Brien Memorial Trophy.

In 1975, he was recruited to the University of Oklahoma by Barry Switzer. After injuries kept him out of the line-up for most of his freshman and half of his sophomore seasons (rushing for only 545 yards in two seasons plus one game of 1976), in his junior season he cut loose, picking up 1,762 yards on 231 carries for an amazing average of 7.6 yards per carry (160.1 yards and 10.9 points per-game) for the regular season. Including the post-season Sims had 1,896 yards, a total yardage school record that stood until 2004 when freshman Adrian Peterson tallied up 1,925. In 1978 Sims was awarded the Heisman Trophy, becoming only the sixth junior to do so. He was runner up the following season in 1979. He led the nation in rushing with 1,896 yards and had 22 touchdowns. He also became the first running back in Big 8 Conference (now merged to form the Big 12 Conference) history to rush for 200-yards in three consecutive games, and had four 200-yard games in a single season.
After losing to the University of Arkansas 31-6 in 1978, Sims led the Sooners to two consecutive Orange Bowl titles in three straight appearances. In the Orange Bowl following the 1978 season, he scored two touchdowns in a 31-24 win over the University of Nebraska. In 1979 against then-unbeaten Nebraska, who had the No. 1 rushing defense in the country at the time, Sims ran for 247 yards and helped the Sooners to a 17-14 win. In his final game as a Sooner, he helped defeat Florida State University, 24-7, rushing for 164 yards. He ended his career at OU with 3,813 yards; most of those yards came in his final two seasons.

Billy Sims is considered one of the best running backs ever to carry a football. The two-time consensus All-American and 1978 Heisman Trophy winner led the Big Eight in rushing in both 1978 and '79 and led the nation in scoring during both of those years.

He set the all-time NCAA record for average yards per rush for backs carrying the ball a minimum of 500 times with 7 yards per carry. Sims capped off his regular season career with 282 yards against Missouri and 247 yards against Nebraska.

He was the first player taken in the 1980 draft by the Detroit Lions. In 1995 he became the 11th Sooner player to be inducted into the National Football Foundation Hall of Fame. 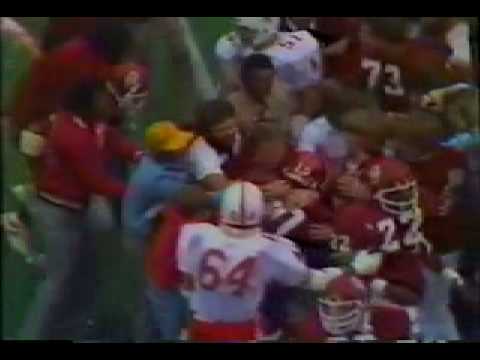