Although Johnson was recruited by several top-ranked colleges such as Indiana and UCLA, he decided to play close to home.[ He initially wanted to attend the University of Michigan, but decided on Michigan State University in East Lansing, after the school's basketball coach, Jud Heathcote, promised that Johnson could play the point guard position.
Johnson did not initially aspire to play professionally, focusing instead on his communication studies major and on his desire to become a television commentator. Playing with future NBA draftees Greg Kelser, Jay Vincent and Mike Brkovich, Johnson averaged 17.0 points, 7.9 rebounds, and 7.4 assists per game as a freshman, and led the Spartans to a 25–5 record, the Big Ten Conference title, and a berth in the 1978 NCAA Tournament. The Spartans reached the Elite Eight, but lost narrowly to eventual national champion Kentucky.
During the 1978–79 season, Michigan State again qualified for the NCAA Tournament, where they advanced to the championship game and faced Indiana State University, which was led by senior Larry Bird. In what was the most-watched college basketball game ever, Michigan State defeated Indiana State 75–64, and Johnson was voted Most Outstanding Player of the Final Four. After two years in college, during which he averaged 17.1 points, 7.6 rebounds, and 7.9 assists per game, Johnson declared himself eligible for the 1979 NBA Draft.

In order to stay close to home, Johnson enrolled at Michigan State University in East Lansing, turning down offers from UCLA and Indiana. As a freshman, Johnson averaged 17 points, 7.9 rebounds and 7.4 assists per game, leading Michigan State to a Big Ten Conference title. With a 25-5 record, it was the first time the Spartans won more than 20 games in school history. Michigan State made the NCAA Tournament but bowed out in the Elite Eight to the eventual national champion, Kentucky. The following season, Johnson put up similar statistics (17.1 ppg, 7.3 rbg, 8.4 apg) but was able to lead the Spartans to the NCAA Championship, defeating Indiana State and soon-to-be rival, Larry Bird. The game drew a 24.1 rating on NBC, the highest rating for a college basketball game, with the Spartans defeating the Sycamores 75-64. Johnson was voted as the Most Outstanding Player of the Final Four. After two seasons at Michigan State, Johnson declared himself for the 1979 NBA Draft.

Desiring to stay close to home, Johnson decided to attend and play basketball at Michigan State University. At the start, Johnson's focus was not on basketball; he wanted to graduate and become a television commentator. However, Johnson turned out to be “Magic” once again, this time at the college level. As a freshman in 1977-78, he helped lead the Spartans to the Big Ten Conference title by averaging 17 points, 7.9 rebounds, and 7.4 assists per game. Johnson put up nearly identical numbers the following year (17.1 points, 8.4 assists, 7.3 rebounds per game), but this time the Spartans went to the NCAA Finals. This game was the start to one of the greatest and most storied rivalries in sports. In the 1979 championship game, Johnson faced Larry Bird for the first time. Johnson and the Spartans beat Bird and Indiana State to win the championship in 1979, but the rivalry of Magic versus Bird continued into the NBA. The rivalry they and their teams had during the '80s in the NBA is considered by some to be the greatest rivalry in sports history. 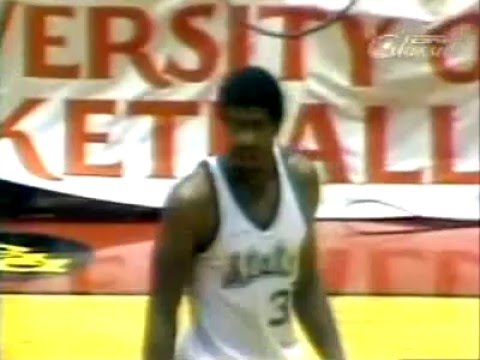