After an embarrassing sweep by baseball's newest dynasty, the Cincinnati Reds, the American League champion New York Yankees returned to the Fall Classic determined to make amends for the previous year's disappointing finale.

The bruised egos and mounting stress had taken its toll on the Yankees organization during the regular season as Billy Martin and Reggie Jackson erupted into a huge argument at Boston's Fenway Park for what the manager termed as "lack of hustle". The fight that followed in the dugout was caught on national-television cameras broadcasting the Saturday afternoon game and both men were blasted in the papers. Both managed to settle their differences, but the damage to their reputations had already been done. The Los Angeles Dodgers, guided by rookie Manager Tommy Lasorda, dethroned the defending champion Reds in the Natioanl League West and steamrolled over the Philadelphia Phillies in the Championship Series. Like the Yankees, Los Angeles featured a potent line-up that included Steve Garvey (thirty-three home runs), Reggie Smith (thirty-two), Ron Cey (thirty) and Dusty Baker (thirty) who set the record as the first ballclub to boast four players who hit thirty or more home runs in the same season.

As the West Coast and East Coast remained locked in a bitter 3-3 tie going into the twelfth inning of Game 1, Paul Blair checkmated the Dodgers with a clutch single that scored Willie Randolph for the opening victory. Los Angeles had revenge the following day after Cey, Smith and Steve Yeager all cracked early inning homers off Catfish Hunter. Burt Hooton faired much better on the mound and tossed a five hitter that evened the Series with a 6-1 triumph. However, New York would jump ahead to a three-game lead as the "Pinstripes" bested Tommy John for a 5-3 decision in the third outing and lefthander Ron Guidry added a 4-2 win in the fourth. Pitching remained a key factor in Game 5, as the hopes and dreams of the Dodger faithful were extended with a masterful, 10-4 complete game performance by Los Angeles ace Don Sutton. All contests up to this point would pale in comparison though to the legendary finale that was about to take place.

Game 6 was certainly the most memorable in the 1977 World Series thanks a spectacular performance at the plate by Reggie Jackson. The Yankees newest "Bomber" was making his eighteenth appearance and it proved to be his greatest as he became only the second player in history to smash three home runs in a single Series game (Babe Ruth did it in 1926 and 1928). In addition, the five home runs in one Series and four consecutive blasts over a two Series-game period was unprecedented.

As Thurman Munson stood on first, Jackson nailed Hooton on his first pitch sending the Yanks ahead with a 4-3 lead. Later in the fifth with two outs and Willie Randolph on first, Reggie launched another rocket off of Elias Sosa that landed in the right-field seats. Finally, he electrified the home team crowd of 56,407 by leading off the eighth with the historic blast into the center-field bleachers. "Mr. October" indeed. Riding on the five RBIs of their slugging champion, the Yanks showed a glimpse of what was "Yankee baseball" and held on for the 8-4 victory that earned their twenty-first World Series title. It was the first crown for the "Bronx Bombers" since 1962.

Jackson's MVP performance against the Dodgers tallied a staggering .450 average with five home runs and eight runs batted in. His offense was the key to the Yankees win as their rotation (minus Torrez who finished 2-0, 2.50 ERA) lacked "the hustle" that Martin liked. Don Gullett and Hunter both went 0-1 and allowed a combined fourteen earned-runs in seventeen innings.


"Jackson with four runs batted in, sends a fly ball to center field and deep! That's going to be way back! And that's going to be gone! Reggie Jackson has hit his third home run of the game!"”

The 1977 World Series matched the returning American League champion New York Yankees against the Los Angeles Dodgers of the National League, with the Yankees winning the Series in six games. Billy Martin won what would be his only World Series title as a manager after guiding the Yankees to a second straight pennant.

The New York Yankees returned to the Fall Classic after being swept by the Cincinnati Reds the previous year. George Steinbrenner’s reputation as a shrewd businessman was evident during baseball’s first reentry draft signing slugger Reggie Jackson for $3 million (from Baltimore) and pitcher Don Gullett (from Cincinnati) for $2 million. Two other key players were acquired by the Yankees through trades. Shortstop Bucky Dent was picked up from the Chicago White Sox for outfielder Oscar Gamble, pitcher LaMarr Hoyt, and $200,000. And after only one year with the Oakland Athletics, pitcher Mike Torrez was traded for pitcher Dock Ellis, and utilitymen, Marty Perez, and Larry Murray.
After a lackluster first half, the Yankees finished strong, winning 38 of their last 51 games edging both the Boston Red Sox and the Baltimore Orioles by 2 ½ games. In amongst the star-laden lineup was an emerging superstar in the left arm of Ron Guidry. Early in the season Guidry was moved from the bullpen into the starting rotation, finishing with sixteen wins against just seven losses with a 2.82 ERA. The Yankees advanced to the World Series after beating the Kansas City Royals in an exciting fifth and final ALCS game, winning it with three runs in the top of the ninth on a string of singles and a costly error by George Brett.

The National League champion Los Angeles Dodgers were skippered by first-year manager Tommy Lasorda. This 1977 club featured the first foursome to hit thirty or more home runs in one Major League season (Steve Garvey–33, Reggie Smith–32, Ron Cey–30, and Dusty Baker–30). The deep pitching staff which led the National League in ERA, 3.22, were led by twenty-game winner, Tommy John and closer Charlie Hough with 22 saves. The Dodgers won 22 of their first 26 games, winning the Western Division easily by ten games over the Cincinnati Reds and then eliminated the Philadelphia Phillies in the NLCS in four games.

YANKEE STADIUM, THE BRONX, NEW YORK -- In a performance as dominating as any of those from the legends who came before him, Reggie Jackson hit three home runs on three pitches to power the New York Yankees to victory over the Los Angeles Dodgers in Game 6 of the 1977 World Series. It was the defining moment in pinstripes for Jackson, whose dramatic performance won over the fans and helped to earn him the suitable nickname, "Mr. October."

This was the day New York had been waiting for. Ever since the Yankees signed Reggie Jackson to a huge five-year contract in November of 1976, the brash slugger wielded a mouth as big as his bat. He was a dynamic offensive force for the 1977 pennant-winning squad, and his colorful quotes drew as much, if not more attention than his on-field play.

All of that changed when the World Series against the Los Angeles Dodgers rolled around. Jackson started slowly, but homered in Games 4 and 5 as the Bombers took a 3-2 Series lead. As it turned out, the big-swinging outfielder was just getting started.

Jackson walked his first time up in the second inning against L.A.'s Burt Hooton. When Jackson faced Hooton again in the fourth, he swung at the first pitch and lined it into the right field stands, a two-run shot that gave the Yankees a 4-3 lead and knocked the Dodger starter from the game.

Elias Sosa fared no better when he faced Jackson in the fifth. With a runner on first again, the slugger duplicated his previous inning's work by sending the first pitch on an express run into the right field stands. By now, the raucous fans were sensing victory and demanding their star to take a curtain call, but Reggie shrugged it off.

Instead, he came out for a dramatic encore in the eighth. Reliever Charlie Hough was in to try his hand at shutting down a blistering-hot Jackson, but his attempt was futile as Reggie crushed a slow knuckler like a cracked piñata.

His third home run on three pitches was the most gargantuan of the night, a 450-foot missle to the empty black bleacher seats in deep center, and it simultaneously broke the backs of the Dodgers and cemented Reggie Jackson's reputation as New York's new postseason star.

Not even Ruth, Gehrig, DiMaggio or Mantle had achieved what Reggie did on that night: three home runs in one game and five overall, both World Series records. This time, with the Yankees up 8-3 and on the cusp of their first Series victory since 1962, Jackson came out of the dugout to pump his fists and acknowledge to the crowd that he finally delivered what he had promised. And though they chanted his name from the highest rows of the stands, the hero of the 1977 Fall Classic would soon be known by a new name: "Mr. October." 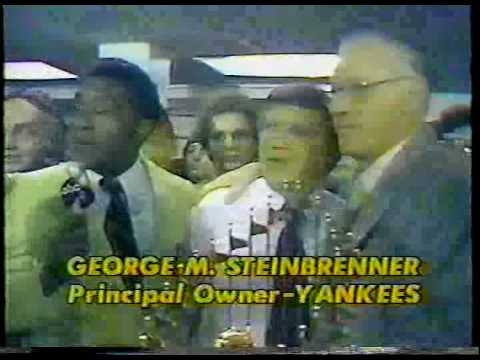