The Ford Transcontinental was a heavy goods vehicle tractor and rigid unit manufactured between 1975 and 1983 by Ford in the Netherlands and Britain.

A total of 8735 units were produced, 8231 in Amsterdam and another 504 at Foden.
Assembled almost entirely from bought in OEM component parts (e.g., cab shell from Berliet, engine from Cummins, transmission from Eaton) it was introduced to fill a perceived gap in the market in anticipation of the relaxation of weight restrictions on HGVs, and as such had a very strong chassis and heavy duty suspension.
Recognizable by its high cab, it was an extremely advanced vehicle for its time offering a high standard of driver comfort and a high power output for its time, courtesy of the well proven 14 litre Cummins engine with typical outputs of 290-350 HP. Also, the Ford Transcontinental is noted for having oil and water meters on the dashboard, another example of the unit being ahead of its time.
Sales did not live up to expectations, mainly because the tractor unit with its heavy duty construction was too heavy for the 32 ton weight limit in the UK at the time, although it was a popular vehicle with drivers, particularly those who were engaged on long distance continental work.
Today the Transcontinental is a particularly rare vehicle, much in favour with collectors of vintage commercials, although a few do remain in revenue earning service throughout Europe.

At the begin of the seventies, business was going very well at Ford of Europe. The commercial vehicle program was very attractive and varied from the succesfull Transit to the heavier A- and D- Series. However, in the heavy end segment of the market Ford was not yet present in Europe. Although the heaviest D-series tractor units were plated for GCW up to 29,5 tons, Ford wanted also Trucks up to 42 tons. In Ford's UK development centre in Dunton, there were a lot of activities going on. The engineers received early 1971 the task to develop a new heavy truck for GCW's up tot 42 tons.

There were a few possible ways to achieve this. The first most feasable idea was to develop a heavier D-series version. Another option was to adapt the American W-Series to European specifications. None of these plans met the requirements of the design letter. Finally the senior management of Ford Europe decided that a complete new vehicle had to be developed: the Elba project beter known as the H-series was born. The design letter required premium quality and high reliability. The first prototypes came on the road in 1973 and they made the majority of their test kilometres on the transport of parts between the major European Ford assembly factories. Opposite to the smaller D-series, Ford had nearly no own components available for the heavy H-series. Only the 7 tons front axle with oil lubricated hubs of the heaviest D-Series and the side members of the American L-series as built in Louisville could be used. Ford designed the driveline to the prooven American concept: Cummins engine, Spicer clutch, Fuller Roadranger gearbox and Rockwell rearaxle|(s). A guarantee for a long lifetime! Finding a suitable cab was more difficult. Ford had no suitable cab for intenational application availble in own house. After difficult negotiations with the Frensh Truck factory Berliet, a contract was signed between Ford and Berliet, for the delivery

of their new TR cab. Although de H-Series was developed in the UK, Ford decided to manufacture te H-Series at the plant of Ford Netherlands in Amsterdam. In this factory the production of passengercars was nearly finished and only the N-Series (a D-Series truck for the German market) and Transit were assembled in the mid seventies. To make the Amsterdam plant near the Nortsea canal suitable for the assembly of Ford's newest model, high investments in buildings and machinery were necessary. Three new buildings covering a total of 12.000 m2 were constructed and the total premises were increased by another 98.000 m2. Also a special testrack was planned. In total, Ford invested in their Amsterdam plant more then 28 biljen Euro. The plant was located in the main sales area of the H-Series. The activities in the plant were restricted to assembly. Only the assembly of the cabs was a very time consuming work. In the beginning, the cabs came as complete naked unpainted bodies from the Viseux plant of Berliet and were only protected by a thin layer of oil. Sometimes they were stored in the open for a few days, so no wonder that today one of the main problem is the bad condition of the cab. In the Amsterdam plant the cabs were de-greased, cleaned, grounded in an electroforese coat, sprayed and completed with the interiour. During the factory summer holiday in July 1975 a cab welding mould was installed in the factory, and from August 1975 the cabbody was also manufactured in the Amsterdam plant. The chassis was not welded. The US imported side members of the Louisville series were cutted to the desired length, holes were drilled and the cross members were fitted with bolts. The assembly of the new truck took place on a conveyer of 72 meters. Initially a production of 7000 units a year was planned. The H-Series was officially revealed as "Transcontinental"on April 30 th 1975 in Amsterdam. The first trucks were destinated to UK and German operators. From September 11 th 1975, the Ford Transcontinental Show toured for 8 weeks through Holland, visiting the 9 Dutch Ford heavy truck dealers. From the extensive Dutch Ford dealer network, Ford appointed only a limited number of commercial vehicle specialists as Ford Transcontinental dealer. From these 9 dealers, in first instance three became the so called "key-dealers" title who were allowed to work on the Cummins engines. 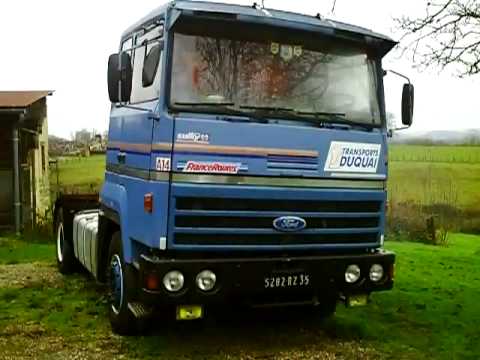