Ford faced two assassination attempts during his presidency, occurring within three weeks of each other: while in Sacramento, California on September 5, 1975, Lynette "Squeaky" Fromme, a follower of Charles Manson, pointed a Colt 45-caliber handgun at Ford. As Fromme pulled the trigger, Larry Buendorf, a Secret Service agent, grabbed the gun and managed to insert the webbing of his thumb under the hammer, preventing the gun from firing. It was later found that, although the gun was loaded with four cartridges, it was a semi-automatic pistol and the slide had not been pulled to place a round in the firing chamber, making it impossible for the gun to fire. Fromme was taken into custody; she was later convicted of attempted assassination of the President and was sentenced to life in prison.

Reaction immediately after the second assassination attempt.
In reaction to this attempt, the Secret Service started to keep Ford at a more secure distance from anonymous crowds, a strategy that may have saved his life seventeen days later: as he left a hotel in downtown San Francisco, Sara Jane Moore, standing in a crowd of onlookers across the street, pointed her pistol at him. Just before she fired, former Marine Oliver Sipple grabbed at the gun and deflected her shot; one person was injured. Moore was later sentenced to life in prison. She was paroled from prison on December 31, 2007, having served 32 years

"Red" was committed to making Manson proud of her environmental work, and when she found out that President Gerald Ford was coming to town, she stuck a .45 Colt automatic into a leg holster and headed out to Capital Park.

As Ford came through the crowd, Squeaky "Red" Lynette Fromme pointed the gun at Ford and was immediately taken down by the Secret Service. She was charged for attempting to assassinate the President, although it was later disclosed that the gun she carried did not have bullets in the firing chamber. 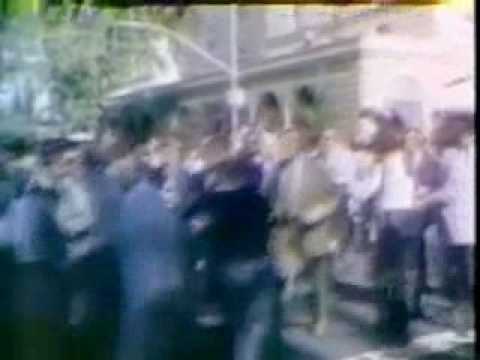