He played AAU basketball for Hancock Construction and, after that year, decided to enroll at Indiana State University in Terre Haute, where he was coached by Bob King.

King suffered a stroke prior to the 1978–79 season and assistant Bill Hodges was promoted to head coach. Hodges had been scouting Bird and really wanted him to play for ISU. Bird led the Sycamores to the NCAA championship game in 1979, his senior season, only to lose to the Michigan State University Spartans, who were led by his future NBA rival, Earvin "Magic" Johnson. The Sycamores finished the season 33–1. That year, Bird won the USBWA College Player of the Year, Naismith and Wooden Awards, given to the year's top male college basketball player. After his three seasons at Indiana State, he left as the fifth-highest scorer in NCAA history. Bird finished his collegiate career with an average of 30.3 points per game. He is on the Missouri Valley Conference All-Century Team.

June 1975
Moves to Terre Haute to begin school at Indiana State. He will have to sit out the 1975-76 season as a transfer.

He eventually enrolled at Indiana State University and the Bird legacy was born.

Bird played for three outstanding years at Indiana State. It all culminated in 1979 when he helped lead the Sycamores to the NCAA National Championship game, only to lose to Magic Johnson and the Michigan State Spartans. Bird was so impressive that year that he won a total of three player-of-the-year awards: the USBWA College Player of the Year, the Naismith Award, and the Wooden Award. Even though he played only three years, Bird finished as the fifth highest scorer in NCAA basketball history with a career scoring average of 33.4 points per game.

While at home, he worked several odd jobs before enrolling at Indiana State University. At Indiana State, Larry became a national superstar. During his first year, he averaged 30 points per game and 10 rebounds. Students at the university loved his style and attendance at games tripled. In 1978-1979, Bird Led the Indiana State Sycamores to a 33-1 record. They made it all the way to the finals of the NCAA Tournament, before falling to the Michigan State Spartans, and future rival Earvin "Magic" Johnson. After playing three years at Indiana State, Bird left as the fifth leading scorer in NCAA history. 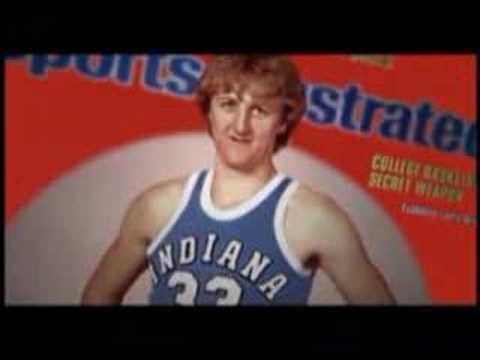 View other events that happened in June 1975