The Moorgate tube crash was a railway disaster on the London Underground, which occurred on Friday February 28th 1975 at 08.46 am.

A southbound train on the Northern Line (Highbury Branch) crashed into the tunnel end beyond the platform at Moorgate station. Forty-three people were killed at the scene, either from the impact or from suffocation, and several more subsequently died from severe injuries; the greatest loss of life in peacetime on the London Underground, and the second greatest loss of life on the entire London Transport system (the first being the 7 July 2005 London bombings). The cause of the incident was never conclusively determined.

A London Underground train has crashed at Moorgate, killing the driver and at least 29 passengers and injuring more than 70 in the worst-ever Tube disaster.

The 0837 train from Drayton Park to Moorgate was packed with commuters going to work when it overshot the platform and ploughed into a dead-end tunnel at 0846.

Passengers on platform nine said the train appeared to shudder and accelerate as it arrived at the station. 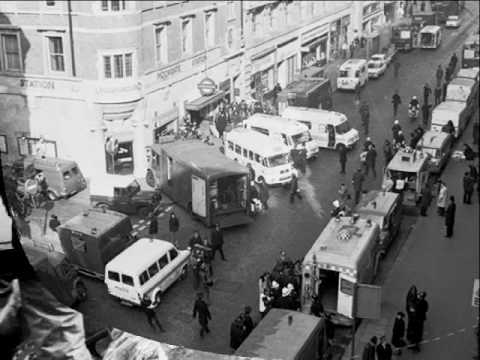