The Lamborghini Countach was a mid-engined sports car produced by Italian automaker Lamborghini from 1974 to 1990.

Its design both pioneered and popularized the wedge-shaped, sharply angled look popular in many high performance sports cars. The "cabin-forward" design concept, which pushes the passenger compartment forward in order to accommodate a larger engine, was also popularized by the Countach.

The word countach (pronounced [kunˈtɑʃ] ( listen)) is an exclamation of astonishment in the local Piedmontese language — generally used by men on seeing an extremely beautiful woman. The term is often considered the equivalent of an excited obscenity in English. It can also be considered the verbal equivalent of a wolf-whistle.

The Countach name stuck when Nuccio Bertone first saw "Project 112" in his studio. The prototype was introduced to the world at the 1971 Geneva Motor Show. Most previous Lamborghini car names were associated with bulls and bullfighting.

The Countach was styled by Marcello Gandini of the Bertone design studio, the same designer and studio that designed the Miura. Gandini was then a young, inexperienced designer—not very experienced in the practical, ergonomic aspects of automobile design, but at the same time unhindered by them. He produced a quite striking design. The Countach shape was wide and low (42.1 inches), but not very long. Its angular and wedge-shaped body was made almost entirely of flat, trapezoidal panels. There were curves, notably the smoothly coke-bottle wing line, but the overall appearance was sharp.

The doors, a Countach trademark, were scissor doors: hinged at the front with horizontal hinges, so that the doors lifted up and tilted forwards. This was partly for style, but just as much because the width of the car made conventional doors impossible to use in an even slightly confined space. Care needed to be taken, though, in opening the doors with a low roof overhead. (With the car's poor rear visibility and wide sills, this led to drivers adopting a method of reversing the car for parking by opening the door, sitting on the sill and reversing while looking over the back of the car from outside.)

The pure style of the prototype was progressively enhanced or cluttered (depending on one's point of view) by the evolution of the car to improve its performance, handling, tractability, and ability to meet mandated requirements. This began with the first production model, which included several vents which were found to be necessary to cool the engine adequately. These included the iconic NACA duct on the door and rear fender of each side of the car. The car design changes ended with a large engine vent directly behind the driver, reducing the rear view. Later additions, including fender flares, spoilers, carburetor covers, and bumpers, progressively changed the aesthetic values of the car.

The Countach's styling and visual impression caused it to become an icon of great design to almost everyone except automotive engineers. The superior performance characteristics of later Lamborghini models (such as the Diablo, or the Murciélago) appealed to performance car drivers and engineers, but they never had the originality or outrageousness that gave the Countach its distinction. The different impressions left by the various Lamborghini models have generated numerous debates and disagreements over what constitutes 'classic' or 'great' automotive design (elegant looks and style, vs. technical and engineering superiority).

The rear wheels were driven by a traditional Lamborghini V12 engine mounted longitudinally with a mid-engined configuration. For better weight distribution, the engine is pointed 'backwards'; the output shaft is at the front, and the gearbox is in front of the engine, the driveshaft running back through the engine's sump to a differential at the rear. Although originally planned as a 5 liter powerplant, the first production cars used the Lamborghini Miura's 4 liter engine. Later advances increased the displacement to 5 liters and then (in the "Quattrovalvole" model) 5.2 L with four valves per cylinder.

The Countach made its public debut at the 1971 Geneva motor show. The design of the ultra low two seater sports car took the world by surprise. Its most captivating parts were of course the scissor doors, swinging up and forward. Over the years these famous doors have become Lamborghini’s trade mark right up to the latest MurciÃ¨lago.

The projected 5.0 litre V12 would be longitudinally positioned at the rear. This engine lay-out by the way was reflected in the prototype’s designation: LP 500 or Longitudinale Posteriore five litre. To improve weight distribution, the five-speed gearbox would be rather unconventionally mounted ahead of the engine, virtually between the seats. This meant that the driveshaft had to go all the way underneath the engine to the final drive. The proposed solution was to let it run in its own tunnel right through the engine’s sump. This in turn raised the engine position (and with it the centre of gravity) forcing the carburettors to be repositioned horizontally to fit under the bonnet. Fuel would be stored in two fuel tanks.

Another unique feature of the Lamborghini Countach development story is the fact that it had been designed around the then new Pirelli P7 tyre. Development of the latter got however behind and the new tyres would not appear before 1978. That is why the prototype and the first generation of road cars stood on rather modest 7.5x14 and 9.5x14 cast magnesium Campagnolo wheels shod with Michelin 205/70 and 215/70 respectively.

The 5.0 litre V12 project was abandoned after the engine exploded during tests. Instead Lamborghini reverted to a more reliable 4.0 litre version based on the Miura power plant. Still with four camshafts and six horizontal two barrel carburettors, the V12 delivered 375 bhp at an incredibly high 8,000 rpm and 368 lb ft of torque at 5,500 rpm. The prototype’s futuristic but very un-Lambo interior was done away with and replaced with a more traditionally styled leather-clad dashboard and seats.

The first batch of Countach LP 400 produced between 1974 and 1978 number only 150 cars before the first evolution appeared in 1978 when the Pirelli P7 tyres became available. With the help of Canadian F1 racing team manager and multiple Countach owner Walter Wolf, chassis designer Dallara developed the LP 400S. The new style telephone dial wheels were covered with 205/50 at the front and ridiculously wide 345/35 Pirellis. No wonder Lamborghini clinched the title for fitting the largest tyres ever on a production road car. Needless to say the complete suspension geometry and chassis set-up needed revision. To house the oversized rubber new wheel arch extensions were created, giving the Countach finally its famous squat stance. Another novelty consisted of the optional V-shaped rear wing. While this undoubtedly enhanced the dramatic styling of the Countach on steroids, it remains debatable whether it did actually improve the Countach’ aerodynamics.

Lamborghini Countach
Ironically the meaner and leaner but also heavier LP 400S proved actually slower in top speed (158 mph) than the LP 400, also because the engine had been left untouched. The LP 400S stayed in production until 1981 and some 235 cars were manufactured.

1988 saw the pinnacle of the Countach saga. To celebrate the mark’s 25th anniversary a special Countach was launched. Mechanically identical to the 5000 QV, the Countach Anniversary boasted a heavily restyled body work with additional air intakes, scoops and disgraceful looking side skirts. Chrysler had acquired Lamborghini by then and the Countach got creatures comfort like electric seats and windows. With 650 cars made, the Anniversary became the most popular of the Countach range.

By 1990 the last of the 2,000 or so Countachs had been sold before the new Diablo heralded the end of two decades of Countach supremacy. One living legend was replaced with another.

Lamborghini showed the Countach prototype--the LP500--at the 1971 Geneva auto show. Designed by Marcello Gandini of Bertone, the wedge-shaped, scissor-door concept was so stunning that most attendees failed to notice Lamborghini's own updated Miura SV. The Countach went into production in 1974 as the LP400. These early cars use a 3.9-liter V-12 with 375 hp and only weigh about 3000 pounds. Although the LP400 is very fast, it lacks the grip of later editions--and its narrow Michelin XWX tires don't help. The LP400 is also the most valuable Countach today because of its limited build numbers, its simple yet gorgeous design, and its unique periscope-style roof.

The second-generation car--the LP400S--arrived in 1978. To improve roadholding, Lamborghini fitted larger wheels and Pirelli's newest tire, the P7. To accommodate the gigantic, 345-section-width rear tires, Lamborghini tacked on fender flares and revised the suspension and the brakes. It also introduced the notorious rear wing that added only minimal downforce and hurt top speed.

Like Elvis, the Countach bulged as it aged. The third-generation car, the LP500S, bowed in 1982 with the same slightly taller body found on later LP400S models, which helped make room for a 4.8-liter V-12. It also gained more padding and leather inside the cockpit and offered handling that was more forgiving for the average driver but slightly compromised for the hard-core enthusiast.

Horsepower junkies got their fix with the introduction of the 5000 Quattrovalvole, or QV, in 1985. The carbureted QVs produced a stonking 455 hp and are more valuable than the less powerful fuel-injected versions.

The most polarizing Countach arrived in 1989 to commemorate Lamborghini'stwenty-fifth anniversary. Horacio Pagani, who later built the Pagani Zonda supercar, was responsible for the car's questionable wings, ducts, slats, and scoops. Although the anniversary edition is controversial, it is well sorted and the best of the lot to drive.

So, does one choose aesthetics or handling dynamics? For us, the answer is a no-brainer. Buy a proper, unmolested LP400 in period-correct yellow or green and park it where you can admire the minimalist design, but make sure there is an open road nearby where you can regularly exercise the glorious twelve-cylinder engine. In the end, it is these early Countachs that truly merit the countach catcall. 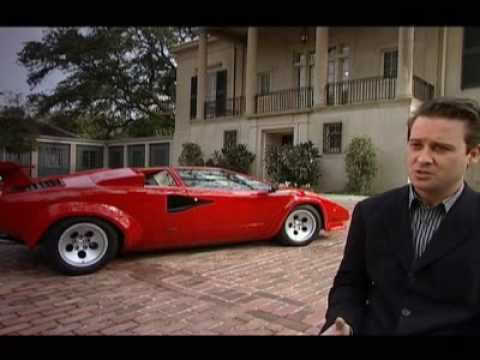 View other events that happened in 1974