President Ford granted former President Richard M. Nixon an unconditional pardon today for all Federal crimes that he "committed or may have committed or taken part in" while in office, an act Mr. Ford said was intended to spare Mr. Nixon and the nation further punishment in the Watergate scandals.

Mr. Nixon, in San Clemente, Calif., accepted the pardon, which exempts him from indictment and trial for, among other things, his role in the cover-up of the Watergate burglary. He issued a statement saying that he could now see he was "wrong in not acting more decisively and more forthrightly in dealing with Watergate."

Gerald Ford demonstrated one refreshing presidential trait last week: when the heat is on, he does not flee the kitchen. Despite the outcry over his premature pardon of Richard Nixon, Ford held the second press conference of his presidency—in prime televiewing time. Apart from some touchy questions about the CIA in Chile, most of the questions (16 out of 20) related to Nixon. Most of the questioners implied, and some said with insulting directness, that Ford had been deceptive and devious in reaching his decision. The President unflinchingly stood his ground.

Was there some undisclosed reason that made him shift so abruptly and free Nixon from prosecution? "I had no secret reason," Ford replied. But wasn't Nixon guilty of an impeachable offense? Ford found the unanimous report of the House Judiciary Committee "very persuasive" and conceded that acceptance of a pardon "can be construed ... as an admission of guilt." Ford thought it was sufficient that Nixon had been "shamed and disgraced."

It could go on and on and on, or someone must write the end to it. I have concluded that only I can do that, and if I can, I must.”

On September 8, 1974, President Gerald Ford pardoned Richard Nixon of any wrongdoings in the Watergate scandal. The pardon actually came out less than a month after Nixon resigned the presidency. Quoting his official pardon: "It is believed that a trial of Richard Nixon, if it became necessary, could not fairly begin until a year or more has elapsed. In the meantime, the tranquility to which this nation has been restored by the events of recent weeks could be irreparably lost by the prospects of bringing to trial a former President of the United States." 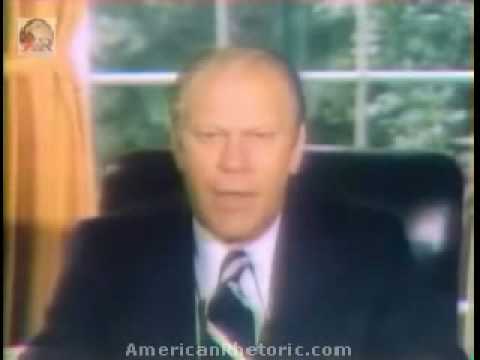