"Harry And Tonto" Is Released

Harry and Tonto is a 1974 film directed by Paul Mazursky and starring Art Carney as Harry Coombes, an elderly widower who is forced from his condemned New York City apartment against his will.

He initially stays with his son's family on Long Island, but eventually chooses to travel cross country with his pet cat Tonto in tow. During his episodic journey, he befriends a hitchhiker, visits his daughter in Chicago and finally meets his youngest son in Los Angeles. The supporting cast includes Philip Bruns, Ellen Burstyn, Geraldine Fitzgerald, Barbara Rhoades, Larry Hagman, Chief Dan George, Melanie Mayron (in her debut role), Josh Mostel, Arthur Hunnicutt and Cliff De Young. Also appearing toward the end of the film is Sally Marr, mother of Lenny Bruce.

In Paul Mazursky's rueful character drama, 57-year-old Art Carney plays Harry, a 70-plus Manhattan widower who loses his tiny apartment to the wrecking ball. Accompanied by his pet, an aged cat named Tonto, Harry sets out on an odyssey to Los Angeles. During his journey, he finds a kindred spirit in a youthful hitchhiker (Melanie Mayron), who eventually finds happiness with Harry's grandson (Joshua Mostel). Harry makes stops at the homes of his grown children (Philip Bruns, Ellen Burstyn, and Larry Hagman), but each visit is more disappointing than the last; he also touches base with an old flame (Geraldine Fitzgerald), who has slipped into senility. By the time he arrives in L.A., Harry has become dispirited by his desultory visits with friends and family, but he eventually realizes that each new day can be a beginning rather than an end. ~ Hal Erickson, All Movie Guide 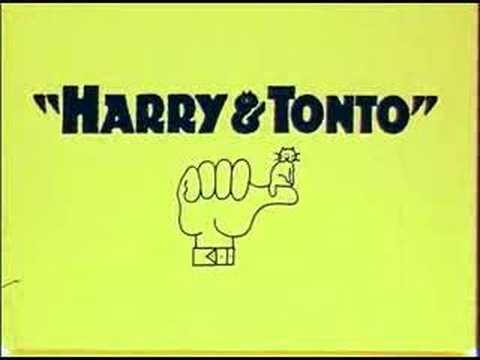