Joelma Building is the famous 25 storied skyscraper located in Sao Paolo Brazil, exactly based in “225 Avenida 9 de Julho”. It is one of the most memorable tragedies that ever took place in Brazil.

At the time of the fire, the building was built of armored concrete, specifically fire-resistant but the only the fact that it had flammable items as its furniture, desks, chairs, even cubicle partitions, etc while the ceiling was made of tiles, prepared from cellulose fiber tiles, strapped in wood. Even the carpets and curtains were made of flammable substances.

Approximaetly 170 people went to the roof during the fire, in hopes of being rescued by helicopter. There was, however, no place clear enough or big enough for helicopters to land. Even if such had been put in, the strong heat and dense smoke made approaching the building by helicopter extremely hazardous. Some "people hid under the tiles on the roof of the building, They alone were found alive." [Forty people jumped to their deaths trying to escape.]

At the time, no emergency lights fire alarms fire sprinkler systems, or emergency exits were fitted to the building. There was only one stairwell, which ran the full height of the building. No evacuation plans had been posted in the case of a fire.

The fire was discovered at around 8:50 am, and was reported to the São Paulo Fire Department approximately 15 minutes later, by an occupant of an adjacent building. The first fire units arrived five minutes later, and immediately called for assistance.

Inside, the fire reached the building's only stairwell and climbed as high as the 15th floor. It did not reach any higher because of a lack of flammables in the stairwell, however it filled the stairwell with smoke and heat, making it impassable. Fire crews attempted to gain access to the building using this stairwell, but could not go any higher than the 11th floor (the first floor consisting of business offices)

Approximately three hundred people were evacuated using the elevators, a practice that is not recommended by fire officials. The four elevator operators were only able to make a few trips, however, before conditions within the building made it impossible to continue.

Approximately 170 people went to the roof during the fire, in hopes of being rescued by helicopter. There was, however, no place clear enough or big enough for helicopters to land. Even if such had been put in, the strong heat and dense smoke made approaching the building by helicopter extremely hazardous.

Approximately 80 people hid under the tiles on the roof of the building. They alone were found alive.

Some people had managed to climb out onto ledges, and a few were able to lower themselves from floor to floor, and were then able to climb down the aerial ladders, while being protected from heat, smoke, and flames. Most of the others stayed where they were until rescue teams could gain access to the building. Desperate to escape the threat of the fire, forty people jumped, or fell, off the building. Fire crews tried to persuade them otherwise by waving to them and holding up signs that said, "Remain Calm! The fire is Out!" Still, they jumped in hopes of reaching a ladder, or surviving the fall. All forty of these people were killed.

By 10:30 am, the fire subsided. Two hours later, it had engulfed all flammables and simply burned itself out. Medical teams, fire crews and police were then able to enter the office towers and search for survivors. Upon completing their search, authorities found that 179 people died in this fire. At the time, this had been the greatest death toll in any high-rise building fire. 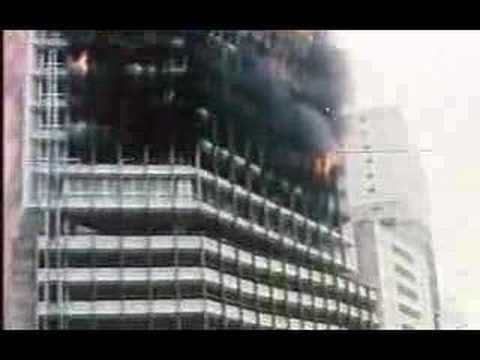