The screenplay by Robert Getchell focuses on the adventures of a thirtysomething widow and her pre-teen son as they journey across the American Southwest to her hometown of Monterey, California, where they hope to find a better life for themselves.

Martin Scorsese's first Hollywood studio production also marked his first (and only) foray into a woman-centered story. Alice Hyatt (Ellen Burstyn), a resigned Southwest housewife, takes advantage of her trucker husband's sudden death to hit the road with her bratty son Tommy (Alfred Lutter) and pursue her childhood dream of a singing career. She finds a job as a lounge singer, but after a horrific encounter with an abusive new beau (Harvey Keitel), she flees and winds up taking a waitress job at Mel's Diner, run by gruff cook Mel (Vic Tayback). With her career on hold, Alice soon finds strength and self-worth through her friendship with the other waitresses, saucy Flo (Diane Ladd) and spacy Vera (Valerie Curtin). When sensitive rancher David (Kris Kristofferson) starts courting her, Alice wonders if she wants to abandon her goals for domesticity again. To contrast Alice's dream life with her reality, Scorsese created a stylized opening sequence of Alice as a child reminiscent of The Wizard of Oz, Duel in the Sun and Gone With the Wind, before shifting into the present-day atmospheric immediacy of location shooting and scenes built out of improvisations. That opening sequence alone cost over twice as much as Scorsese's debut feature, Who's That Knocking At My Door?. ~ Lucia Bozzola, All Movie Guide 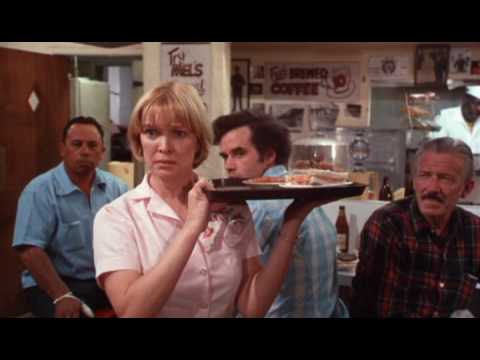