"The Godfather Part II" Is Released

The Godfather Part II is a 1974 American thriller film directed by Francis Ford Coppola from a script co-written with Mario Puzo.

The film is both a sequel and a prequel to The Godfather, chronicling the story of the Corleone family following the events of the first film while also depicting the rise to power of the young Vito Corleone. The film stars Al Pacino, Robert Duvall, Diane Keaton, John Cazale, and Talia Shire. New cast members include Robert De Niro, Michael V. Gazzo and Lee Strasberg.

The Godfather Part II was nominated for 11 Academy Awards and won six, including Best Picture and Best Supporting Actor for Robert De Niro, and has been selected for preservation in the U.S. National Film Registry.

Francis Ford Coppola's legendary continuation and sequel to his landmark 1972 film, The Godfather, parallels the young Vito Corleone's rise with his son Michael's spiritual fall, deepening The Godfather's depiction of the dark side of the American dream. In the early 1900s, the child Vito flees his Sicilian village for America after the local Mafia kills his family. Vito (Robert De Niro) struggles to make a living, legally or illegally, for his wife and growing brood in Little Italy, killing the local Black Hand Fanucci (Gastone Moschin) after he demands his customary cut of the tyro's business. With Fanucci gone, Vito's communal stature grows, but it is his family (past and present) who matters most to him -- a familial legacy then upended by Michael's (Al Pacino) business expansion in the 1950s. Now based in Lake Tahoe, Michael conspires to make inroads in Las Vegas and Havana pleasure industries by any means necessary. As he realizes that allies like Hyman Roth (Lee Strasberg) are trying to kill him, the increasingly paranoid Michael also discovers that his ambition has crippled his marriage to Kay (Diane Keaton) and turned his brother, Fredo (John Cazale), against him. Barely escaping a federal indictment, Michael turns his attention to dealing with his enemies, completing his own corruption. ~ Lucia Bozzola, All Movie Guide 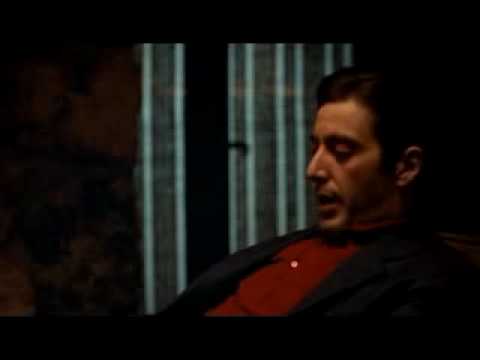