As a junior at Ohio State Archie was named to every All-American team and was called "the greatest football player I've ever coached" by Woody Hayes.

Combining power, speed and an uncanny ability to break four or five tackles on a single play, he smashed the all-time record for running backs in the Big Ten, amassing 4,064 yards. As a senior Archie extended his record of consecutive 100-yards plus games to 31, his overall yardage to 5,176 and became the only player ever to win the Heisman twice. Griffin was exceptional in several ways. Of course, he was magnificently consistent, yards week in and week out. Griffin, a leader both on the field and off, always remained modest. Most significantly, Archie reflected the high standards of the Griffin family, exemplifying hard work, devotion to excellence and resilience. After graduating early from Ohio State with an excellent scholastic record, Griffin was signed by the Cincinnati Bengals. He is currently working at his alma mater as Associate Director of Athletics.

Archie was elected to the National Football Foundation and College Hall of Fame in 1986.

Archie Mason Griffin (born August 21, 1954) is a former American football running back, and is college football's only two-time Heisman trophy winner. Griffin won four Big Ten Conference titles with the Ohio State Buckeyes and was the first player ever to start in four Rose Bowls.

Griffin played for the Ohio State University Buckeyes from 1972-75. Among Ohio State University college football fans, Griffin holds a status akin to a living folk hero. Former Ohio State head coach Woody Hayes said of Griffin, "He's a better young man than he is a football player, and he's the best football player I've ever seen."[3]
In 1972 Griffin was a T-formation halfback, and from 1973 through 1975 he was the team's I-formation tailback. He led the Buckeyes in rushing as a freshman with 867 yards, but his numbers exploded the following year with the team's conversion to the I-formation. He rushed for 1,428 yards in the regular season as a sophomore, 1,620 as a junior, 1,357 as a senior. Griffin is the only back to lead the Big Ten Conference in rushing for three straight years. Overall, Griffin rushed for 5,589 yards on 924 carries in his four seasons with the Buckeyes (1972-1975), then an NCAA record. He had 6,559 all-purpose yards and scored 26 touchdowns. In their four seasons with Griffin as their starting running back, the Buckeyes posted a record of 40-5-1.[4] Griffin is one of only two players in collegiate football history to start four Rose Bowl games, the other being Brian Cushing.
Griffin introduced himself to Ohio State fans in his second game as a freshman by setting a school single-game rushing record of 239 yards in the second game of the 1972 season, against North Carolina, breaking a team record that had stood for 27 seasons. Coincidentally, his only carry in his first game had resulted in a fumble. He broke his own record as a sophomore with 246 rushing yards in a game against the Iowa Hawkeyes. Over his four-year collegiate career, Griffin rushed for at least 100 yards in 34 games, including an NCAA record 31 consecutive games.

In 1974, Ohio State tailback Archie Griffin became just the fifth junior ever to win the Heisman Trophy. In 1975, Griffin became the first player ever to win a second Heisman. Twenty-eight years later he is still the only player to have two of the coveted bronze statues, which go annually to the nation’s top college football player.
But even though more than two decades have passed, honors continue to befall Griffin now the President of the Ohio State Alumni Association.

Most recently, Griffin was selected to the National High School Hall of Fame. He was inducted into that organization in the fall of 1996. He also is a member of the National Football Foundation and the Rose Bowl halls of fame and, of course, belongs to the Ohio State University Athletics Hall of Fame.

Griffin was the Buckeyes’ starting tailback for four years, leading Ohio State to a 40-5-1 record and four Big Ten titles between 1972 and 1975. He started in four-consecutive Rose Bowls, the only player ever to do so, and was a three-time first-team All-American.

At 5 feet 9 inches and 180 pounds, Griffin was small by college football standards even then, but he played with the heart of a lion and no football accomplishment was beyond his reach.

In just the second game of his freshman year, Griffin ran for a school record 239 yards. It was the start of a brilliant career that would see him amass an OSU record 5,589 yards and 26 touchdowns.

Excluding bowl games, Griffin rushed for 5,177 yards on 845 carries. The former figure ranks him fifth among all NCAA career ball carriers and Griffin rarely played more than half a game, his coach, Woody Hayes, always opting to take his star out as soon as the Buckeyes were in control.

Between his sophomore and senior seasons, Griffin ran for 100 or more yards in 31 consecutive regular-season games. That, too, is still an NCAA record, as is his 33 career 100-yard games.

In addition to two Heisman Trophies, Griffin also has a pair of Silver Footballs. The latter award is presented annually by the Chicago Tribune to the Big Ten’s MVP. He is one of just three players to win that award twice. Griffin also was a two-time pick as National Player of the Year by both United Press International and the Walter Camp Foundation. He won those honors as a junior and senior.

Following his senior year, Griffin, who graduated a quarter early with a degree in industrial relations, received the NCAA’s prestigious Top Five Award for combined excellence in athletics, academics and leadership. It is the highest award the NCAA can bestow.

After graduation, Griffin was a first-round draft choice of the Cincinnati Bengals. He played eight years of professional football, before returning to Columbus and joining the staff at Ohio State.

Honors and Awards
1972: Set a then OSU single-game rushing record with 239 yards against North Carolina. Rushed for 867 yards during the year, then a freshman record.

1973: Became the first OSU sophomore to rush for 1,000 yards (1,577) and was named to a first-team spot on the UPI All-America team. Winner of the Chicago Tribune’s Silver Football as the Big Ten Player of the Year.

1974: Rushed for a then-school record 1,695 yards and was a unanimous All-America choice. Won the Heisman Trophy, a second-consecutive Silver Football and was the UPI and Walter Camp player of the year. 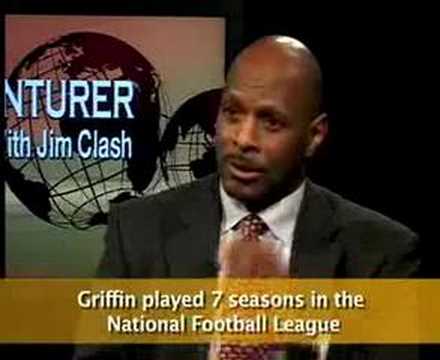