The 1974 World Series matched the two-time defending champion Oakland Athletics against the Los Angeles Dodgers with the A’s winning the Series in five games.

Rollie Fingers figured in all four Oakland victories, posting a win and three saves, and was honored as the Series MVP. Oakland became the first team to win three consecutive Series since the New York Yankees won five in a row between 1949 and 1953; the win secured the A's status as one of the truly dominant teams of the 1970s. (The other "team of the decade," the Cincinnati Reds, would check in with consecutive Series victories in 1975 and 1976.)
The 1974 Fall Classic was the first all-California World Series. The two franchises would meet again 14 years later.

The 1974 Los Angeles Dodgers were the first (and through 2009, only) Dodger team to win at least 100 games since moving west from Brooklyn; they won the National League West division after a season long battle by four games over the Cincinnati Reds, then defeated the Pittsburgh Pirates, three games to one, in the National League Championship Series. The Oakland Athletics won the American League West division by five games over the Texas Rangers, then defeated the Baltimore Orioles, three games to one, in the American League Championship Series.

Oakland Athletics
The Oakland A's, dynasty or not, had become something of a running joke in the American League, consistently matching their on-field heroics with locker-room meltdowns and intra-squad theatrics. After yet another banner year (Catfish Hunter won 25 games, Reggie Jackson knocked in 105 runs, and Billy North stole 54 bases), the team seemed to be winning more attention for its dysfunctional communication patterns than for its superior lineup. Hunter was threatening to file for free agency in 1975 if owner Charles O. Finley didn't come through with back pay Hunter claimed he had coming. Traumatized former second baseman Mike Andrews was considering legal action for the shabby treatment he received in the previous year's World Series. Teammates Rollie Fingers and Blue Moon Odom had gotten into a fistfight. And the Series-winning manager of the previous year, Dick Williams was long gone, having had one personality clash too many with the A's front office. Despite all the melodrama, or perhaps because of it, the Athletics won the A.L. pennant for the third straight year, then dispatching the Baltimore Orioles in a four-game ALCS.

Los Angeles Dodgers
The businesslike Los Angeles Dodgers, for their part, looked downright corporate, and seemed, to many, to be the better team. On paper, at least, they were. L.A. won 102 games, boasted the best team ERA in the National League, and led their league in runs scored. Steve Garvey hit .312, Jimmy Wynn knocked in 108 runs, Bill Buckner hit .314 in one of the best years of his career, Davey Lopes stole 59 bases, Andy Messersmith won 20 games, and Don Sutton won 19. It was all very brisk and efficient—Big (Dodger) Blue, with the unflappable, perennially studious Walt Alston, in his twenty-first year as manager of the club, holding everything together. Unlike the Oakland squad, nobody in the Dodger clubhouse appeared to need therapy to work out any simmering interpersonal issues. The Series promised, at the very least, to be a memorable conflict of worldviews.

The Oakland A's had emerged as one of baseball premiere dynasties in the 1970's but friction between the front office and the clubhouse threatened to tear the 2x defending World Champions apart. Catfish Hunter had openly stated his desire to declare himself a free-agent unless owner Charles Finley paid him a back salary that the four time twenty game winner felt owed to him. Mike Andrews also announced that he was filing a libel-and-slander suit against Finley for his unjust "firing" after a costly error in the '73 Series. Commissioner Bowie Kuhn had ordered the Oakland owner to reinstate the player, but the damage had already been done. To make matters worse, teammates Rollie Fingers and Blue Moon Odom had been involved in a pre-Series fist fight that destroyed any camaraderie in the bullpen. Despite the political overtones, Oakland maintained its hold on the American League and prepared to meet the National League champion Los Angeles Dodgers in the first all-West Coast Classic.

Reggie Jackson continued to earn his reputation as Mr. October and hammered the first homer of the Series off of Andy Messersmith at Dodger Stadium. Ken Holtzman added a two base hit of his own in the fifth and eventually scored on Bert Campaneris' squeeze bunt. After a devastating throwing error on Ron Cey's part in the eighth, Oakland finished the opener with a 3-2 victory. Rollie Fingers, who had been a clutch-closer in the previous Classic, continued to deliver in relief of Holtzman and yielded only four hits. However, Walter Alston's Dodgers came back in Game 2 for a 3-2 triumph on Joe Ferguson's two run homer in the sixth. The ever-resilient A's threatened to comeback in the ninth, but Los Angeles reliever Mike Marshall picked off Herb Washington at a time when Oakland's designated runner represented his club's potential tying run.

Hunter returned for Game 3 and stretched his Series record to 4-0 with close support from Fingers. After Oakland notched two unearned runs in the third, the "Catfish" and "Mustache" cruised to a 4-0, Series-leading victory. Holtzman, who had defied the odds at the plate, maintained his consecutive Series hitting streak with a bases-empty home run off of his adversary (Messersmith) in the third. Even more impressive was the fact that the designated-hitter rule had just been introduced during the regular season in '73 and the Oakland ace had made very few appearances in the batter's box (two-years later the substitution rule would be inducted into post-season play.) The Dodgers answered back with Bill Russell's two run triple in the fourth, but rookie manager Alvin Dark's A's went on a four run "killing spree" in the sixth, as pinch-hitter Jim Holt broke through the 2-2 deadlock with a two run single. The result was a 5-2 victory that put the American Leaguers one win away from their third consecutive title.

Los Angeles threw everything they had at the Athletics in Game 5 and managed to hold on for a 2-2 tie entering the bottom of the seventh. Mike Marshall (a fifteen game winner who had just finished a record-breaking season in which he made one-hundred six appearances) was sent in to close the deal, but surrendered a devastating home run to Joe Rudi. Bill Buckner attempted to get his team back on track with a valiant effort that unfortunately backfired (it was a sign of what was to come). After leading off the eighth with a single, a desperate Buckner tried to stretch the bases on a Bill North error. However, a textbook relay from Jackson-to-Dick Green-to-Sal Bando nailed the daring base runner just short of third and it was all over from there. The A's emerged 3-2 victors with a "back-to-back-to-back" title that reinstated their place among baseball's elite.

The World Series opened in Southern California, but it was the Northern Californians who drew first blood, with single runs in the second and fifth innings. The Dodgers scored once in the bottom of the fifth, but they trailed 3-1 when they came to bat in the bottom of the ninth. With two outs, Jimmy Wynn homered to left-center, and Steve Garvey followed with a single to right. That brought up catcher Joe Ferguson, and Catfish Hunter -- scheduled to start Game 3 -- was summoned from the bullpen. Hunter struck out Ferguson, and the A's had the 3-2 victory.
Ferguson redeemed himself with a two-run homer in the sixth inning of Game 2, giving the Dodgers a 3-0 lead. The A's battled back with a pair of runs in the ninth, and had pinch-runner Herb Washington on first base with just one out. Reliever Mike Marshall picked Washington off, however, and then struck out pinch-hitter Angel Mangual to end the game.

Back home for Game 3, the Athletics reversed the Game 2 results with a 3-2 victory, Catfish Hunter going 7 1/3 strong innings for the victory. And Oakland took a commanding lead in the Series with a 5-2 triumph in Game 4. Trailing 2-1 in the sixth, the A's scored four times, two of the runs coming on pinch-hitter Jim Holt's single to right field. That made the score 5-2, and that's how it ended as Ken Holtzman and Rollie Fingers combined on a seven-hitter.

Their backs against the wall, the Dodgers didn't roll over in Game 5. Trailing 2-0, they scored twice in the sixth on Jimmy Wynn's sacrifice fly and Steve Garvey's RBI single. But Joe Rudi led off the bottom of the seventh with a home run, Rollie Fingers pitched scoreless eighth and ninth innings, and the A's won 3-2, thus capturing their third straight World Championship. 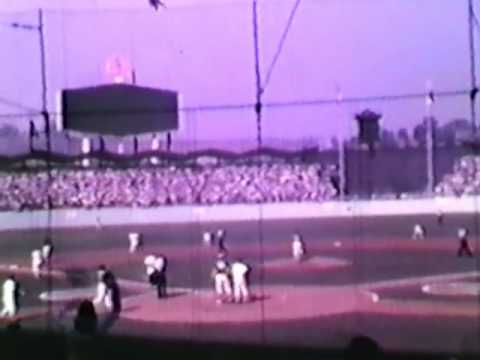