On this day in 1973, in a highly publicized "Battle of the Sexes" tennis match, top women's player Billie Jean King, 29, beats Bobby Riggs, 55, a former No. 1 ranked men's player.

Riggs (1918-1995), a self-proclaimed male chauvinist, had boasted that women were inferior, that they couldn't handle the pressure of the game and that even at his age he could beat any female player. The match was a huge media event, witnessed in person by over 30,000 spectators at the Houston Astrodome and by another 50 million TV viewers worldwide. King made a Cleopatra-style entrance on a gold litter carried by men dressed as ancient slaves, while Riggs arrived in a rickshaw pulled by female models. Legendary sportscaster Howard Cosell called the match, in which King beat Riggs 6-4, 6-3, 6-3. King's achievement not only helped legitimize women's professional tennis and female athletes, but it was seen as a victory for women's rights in general.

A few critics were less than impressed by King's victory. King was 26 years younger, and some experts claimed that it was more an age versus youth game. According to Jack Kramer, "I don't think Billie Jean played all that well. She hit a lot of short balls which Bobby could have taken advantage of had he been in shape. I would never take anything away from Billie Jean — because she was smart enough to prepare herself properly — but it might have been different if Riggs hadn't kept running around. It was more than one woman who took care of Bobby Riggs in Houston." Before the match, however, King had forced the American television network ABC to drop Kramer as a commentator. King said, "He doesn't believe in women's tennis. Why should he be part of this match? He doesn't believe in half of the match. I'm not playing. Either he goes – or I go." After the match, Pancho Segura declared that Riggs was only the third best senior player, behind himself and Gardnar Mulloy, and challenged King to another match. King refused.

The "Battle of the Sexes" captured the imagination of the country, not just tennis enthusiasts. On Sept. 20, 1973 in Houston, she was carried out on the Astrodome court like Cleopatra, in a gold litter held aloft by four muscular men dressed as ancient slaves. Riggs was wheeled in on a rickshaw pulled by sexy models in tight outfits, "Bobby's Bosom Buddies." 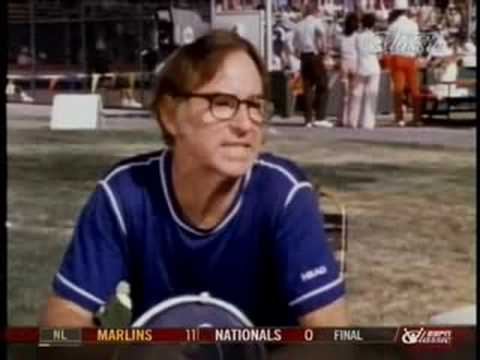