"The Ruling Class" Is Released

The Ruling Class is a 1972 British comedy film, an adaptation of Peter Barnes' satirical stage play which tells the story of a paranoid schizophrenic British nobleman (played by Peter O'Toole) who inherits a peerage.

An institutionalized schizophrenic with a Messiah complex inherits the position of an English Earl in this cutting satire of British society, based on a play by Peter Barnes. The film's irreverent tone is established with the disturbingly hilarious death of the thirteenth Earl of Gurney during a bizarre attempt at auto-erotic asphyxiation. To the dismay of the earl's family, the title passes to his son Jack (Peter O'Toole), who has been locked away for eight years after claiming to be the second coming of Jesus Christ. Mad but harmless, Jack is released to assume his seat. However, his embrace of Christianity proves incompatible with a position of power in "normal" society, where peace and love are considered serious weaknesses, and a somewhat unhinged psychiatrist is called to help him adjust. Meanwhile, Jack's scheming uncle, Sir Charles (William Mervyn), works on developing a complex scheme to trick Jack out of his position. Loaded with idiosyncratic touches from eccentric camera angles to unexpected outbursts of song, the film creates an experience nearly as inspired and mad as O'Toole's brilliantly hilarious central performance. The film's devilish invention may at times seem overloaded, but most drawbacks are redeemed by the sharpness of the satire, particularly during the memorably disturbing finale. ~ Judd Blaise, All Movie Guide 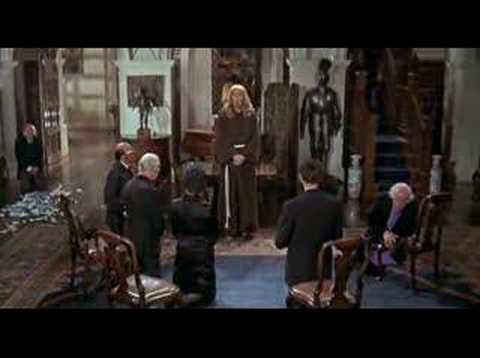