On June 9-10, 1972, extremely heavy rains over the eastern Black Hills of South Dakota produced record floods on Rapid Creek and other streams in the area.

Nearly 15 inches of rain fell in about 6 hours near Nemo, and more than 10 inches of rain fell over an area of 60 square miles. According to the Red Cross, the resulting floods left 238 people dead and 3,057 people injured. In addition to the human tragedy, total damage was estimated in excess of $160 million (about $664 million in 2002 dollars), which included 1,335 homes and 5,000 automobiles that were destroyed. Runoff from this storm produced record floods (highest peak flows recorded) along Battle, Spring, Rapid, and Boxelder Creeks. Smaller floods also occurred along Elk Creek and Bear Butte Creek.

The Black Hills Flood of 1972, in the Black Hills of Western South Dakota, USA, occurred on June 9, 1972. The extreme rainfall of around 15 inches (380 mm) of rain in 6 hours sent Rapid Creek and other creeks overflowing and flooded many residential and commercial properties around the Black Hills. During the night of June 9, the Canyon Lake Dam became clogged with debris and failed, resulting in 238 deaths and 3,057 injuries. Several bodies were never found. There were over 1,335 homes and 5,000 automobiles destroyed. The value of the damaged property was over $160M 1972 in dollars.

Record flows were reported on Rapid, Battle, Bear Butte, and Boxelder Creeks. On June 9 a stationary front, with moderate southeast surface flow, moved though high pressure aloft. A strong flow of warm, moist air near the surface fed the storms and anchored them against the Hills for 6 to 8 hours. An average of 6 inches of rain fell with up to 15 inches reported. Rainfall intensities of 2 to 6 inches/hour were common. Canyon Lake breached, adding to the wall of water that poured through Rapid City. Flow on Rapid Creek in Rapid City was estimated at 50,000 cfs. After the flood, 750 acres near Rapid Creek were designated as a floodway. $164 million in damages and 238 deaths were reported. 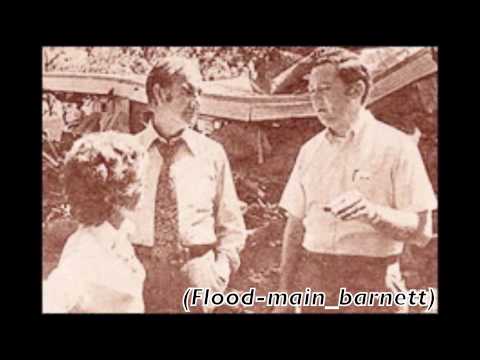