"Cries And Whispers" Is Released

Cries and Whispers (Swedish: Viskningar och rop, literally "Whispers and Cries") is a 1973 Swedish film about two sisters who watch over their third sister on her deathbed, torn between fearing she might die and hoping that she will.

The film was written and directed by Ingmar Bergman. It stars Harriet Andersson, Kari Sylwan, Ingrid Thulin and Liv Ullmann.

Unlike most of Bergman's films, Cries and Whispers uses saturated colour, especially crimson. For his work on this film, Sven Nykvist won the Academy Award for Best Cinematography, and the film was also nominated for Best Costume Design, Best Director, and Best Writing, Story and Screenplay Based on Factual Material or Material Not Previously Published or Produced. Unusually for a foreign language film, it was also nominated for Best Picture, not for Best Foreign Language Film.

Cries and Whispers stars Liv Ullman and Ingrid Thulin as the sisters of dying cancer patient Harriet Andersson. Both sisters have already had brushes with death: Ullman has had an affair which prompted her husband's suicide, while Thulin has long wanted to do away with herself, at one point mutilating her own vagina out of self-hatred. As for Andersson, she has been in pain so long that she feels as though she's in the midst of death-in-life. With her two sisters wrapped up in their own problems, Harriet turns to her housekeeper Kari Sylwan for comfort; Sylwan has herself suffered the death of a child, and has developed a philosophical attitude towards impending doom. One of the most influential moments of the film -- when two of the sisters share the innermost thoughts that they'd kept from one another for so many years -- is filmed without benefit of dialogue, with the music of Chopin (enhanced by cinematographer Sven Nykvist's carefully selected camera angles) "speaking" for the ladies. While Cries and Whispers only won the Oscar for cinematography, the film did very well for itself in international awards contests. ~ Hal Erickson, All Movie Guide 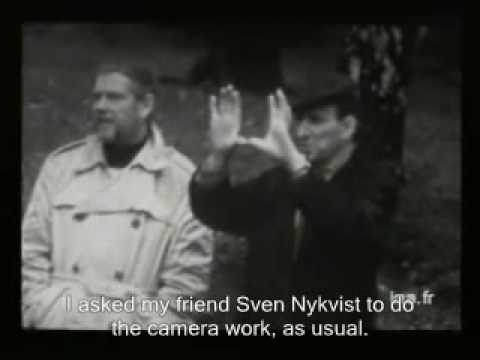