Shaft is a 1971 American blaxploitation film directed by Gordon Parks and released by Metro-Goldwyn-Mayer.

An action film with elements of film noir, Shaft tells the story of a black private detective, John Shaft, who travels through Harlem and to the Italian mob in order to find the missing daughter of a black mobster. It stars Richard Roundtree as Shaft, Moses Gunn as Bumpy Jonas, Charles Cioffi as Lt. Vic Androzzi, Christopher St. John as Ben Buford, and Gwenn Mitchell and Lawrence Pressman in smaller roles. The movie was adapted by Ernest Tidyman and John D. F. Black from Tidyman's 1971 novel of the same name.

Richard Roundtree cuts a startlingly new and powerful heroic figure as John Shaft, "the cat who won't cop out, when there's danger all about" in Gordon Parks' seminal action film, Shaft. John Shaft is a black private eye with a small office near Times Square. On his way there one day, he gets pumped for information by Lt. Victor Androzzi (Charles Cioffi), a friend of his on the police force, about something big going down in Harlem involving black crime kingpin Bumpy Jonas (Moses Gunn). Shaft can't help him and leaves, only to just miss being waylaid by two of Bumpy's strong-arm men at his office, one of whom ends up dead on the pavement eight floors or so below. Squeezed by the cops, who are holding a potential manslaughter arrest over his head, Shaft contacts Bumpy, who reveals that his teenage daughter, whom he's always kept away from his business, has been kidnapped. There's been no ransom demand and no clue as to who did it, and he wants Shaft to find the culprits, insisting that he start with a group of Harlem-based black militants led by Shaft's onetime friend Ben Buford (Christopher St. John). No sooner does he find Buford, holed up in a decaying part of Harlem, however, than his friend's comrades are mowed down by submachine gun fire, and Shaft and Buford barely escape. With Shaft angry and out for blood, everyone is forced to come clean -- Bumpy knows that it's the Mafia that kidnapped his daughter, as they want in on the Harlem drug trade that he controls; they're holding her somewhere else outside of Harlem, where his men are no good to him, which is why he wanted Shaft to hook up with Buford. Androzzi tells Shaft that a dozen Mob trigger men from out of town have been spotted in Greenwich Village. He doesn't know why they're there, but he does know that if fighting breaks out between Bumpy's men and the Mafia, it's going to look like a race war, and the whole city could erupt. Shaft doesn't like the way he's been manipulated, but he sees Androzzi's point -- he links the trigger men to the kidnapping and finds the girl, but loses her again, getting shot in the process. Even though he's wounded, Shaft heads for a final confrontation with the kidnappers, supported by Ben's friends in an armed assault on the building where they're holed up. ~ Bruce Eder, All Movie Guide 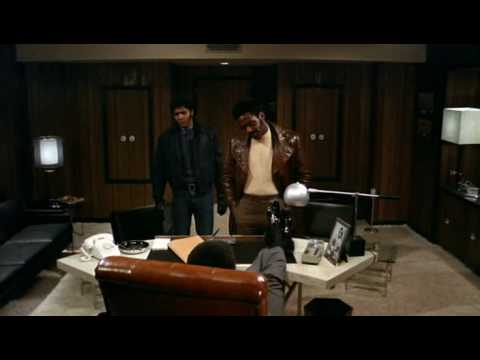