"The Fight of the Century" Joe Frazier vs Muhammad Ali

Fight of the Century was the promotional nickname given to the first boxing match between champion Joe Frazier (26-0, 23 KOs) and challenger Muhammad Ali (31-0, 25 KOs), held on March 8, 1971 at New York's Madison Square Garden.

The two fighters were the subject of numerous magazine cover stories and TV documentaries. They were guaranteed purses of $2.5 million each, then a record for a single prizefight.

By the evening of the match, Madison Square Garden had a circus-like atmosphere, with scores of policemen to control the crowd, outrageously dressed fans, and countless celebrities, from Norman Mailer and Woody Allen to Frank Sinatra, who took photographs for Life magazine. Artist LeRoy Neiman painted Ali and Frazier as they fought. Burt Lancaster served as a color commentator for the closed-circuit broadcast. Even though Lancaster had never performed as a sports commentator before, he was hired by the fight's promoter Jerry Perenchio, who was also a friend of his. The other commentators were play-by-play announcer Don Dunphy and boxing champion Archie Moore.
The fight itself exceeded even its promotional hype. Ali dominated the first three rounds, peppering the shorter Frazier with rapier-like jabs that raised welts on the champion's face. Frazier began to dominate in the fourth, catching Ali with several of his famed left hooks and pinning him against the ropes to deliver tremendous body blows. The fight was about even until late in round 11, when Frazier caught Ali, backed into a corner, with a crushing left hook that almost floored Ali, sending him falling into the ropes. Ali managed to survive the round, but from then on Frazier seemed to come back in the next three rounds. At the end of round 14 Frazier held a lead on the three scorecards. Early in round 15, Frazier landed a spectacular left hook that put Ali on his back (for only the third time in his career). Ali, his right jaw swollen grotesquely, got up from the blow quickly, and managed to stay on his feet for the rest of the round despite several terrific blows from Frazier. A few minutes later the judges made it official: Frazier had retained the title with a unanimous decision, dealing Ali his first professional loss.
Ali was visibly tired after the 6th round, and though he put together some flurries of punches after that round, he was unable to keep the pace he had set in the first third of the fight.
This was the most crushing defeat for Ali. He was still in his prime and took many hard blows to the head and body. Ali would not win another world title fight until three and a half years later, on October 30, 1974. The only time that Ali looked worse was in the Larry Holmes fight. In that fight Ali was 38 and was defeated by Larry Holmes as Ali's corner threw in the towel after the 10th round.
Ali and Frazier fought twice more, Ali winning both encounters. The last of these was the 1975 Thrilla in Manila, which, like the first bout, won the Ring Magazine fight of the year award and many other honors.
Both boxers are in the International Boxing Hall of Fame.

It was early morning on March 9th, 1971 in Friedberg, Germany, when my mother crept into my room and gently shook me awake. 'Do you want to watch'? Silly question, of course I did. The build up to this event had been going on for weeks now and even at the tender age of 8, I knew something


was going on. Sleep was hard to come by that night, since I was too afraid that she would not wake me as promised.

The new TV set was humming, purchased for just this occasion and whilst it was not quite clear to me who these guys were, I remember the excitement as if it was yesterday. I had the seat of honor in between my parents, wrapped into a warm blanket and my eyes glued to the black and white screen. Excitement from half a world away and a day earlier on the calendar, filled our living room.

My Dad pointed to a man struggling with a big camera. 'That's Frank Sinatra'. The announcer was introduced as Burt Lancaster as the camera swayed over to Norman Mailer and Woody Allen, names that at the time meant nothing to me. Glaring lights, announcements in a then unfamiliar language - I was struck with awe - and there they were. Two hulking men, one tall, one short, dancing on their feet whilst the crowd was going crazy.

Suddenly a bell went off and the taller man, who I was to learn was Muhammad Ali formerly known as Cassius Clay, shot out of his corner towards Joe Frazier. It scared and excited me at the same time. The two athletes were going at each other in what looked to my 8 year old eyes like a dangerous dance. During those magical moments my first career choice ripened in my head - I was going to become the first female boxing champion.

My Dad explained the fundamentals to me, the fight was split up in rounds, each lasting 3 minutes. To me it seemed much longer at the time. I was worried of the smaller man, my favorite, being hurt. But Joe Frazier stood his ground. The match kept going, round after round, I was getting tired but was unable to stop watching, routing and screaming for Mr Frazier to win. 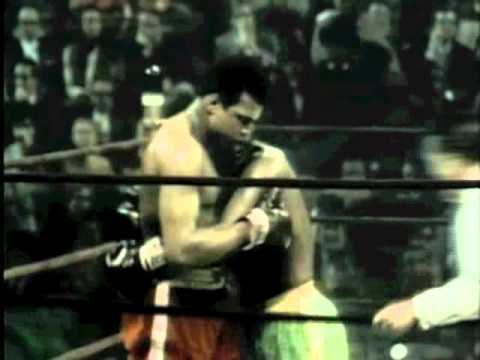