The 1968 Democratic National Convention of the U.S. Democratic Party was held at the International Amphitheatre in Chicago, Illinois, from August 26 to August 29, 1968.

The purpose of the Democratic National Convention was for the election of a suitable nominee to run as the Democratic Party’s choice for the post of President of the United States of America.

With events in the United States crashing against the American population faster and faster, 1968 quickly developed into a year of rage. All across America emotions ran high. Tensions peaked when two leaders, ones who had brought the promise of hope to a generation, were assassinated. A harsh blow came to the Civil Rights movement when Martin Luther King, Jr., was assassinated on April 4, 1968, followed by the assassination of one of the anti-war movements hopefuls, Robert F. Kennedy on June 5/6 (shot early morning of June 5, died 26 hours later), 1968.

Chicago's mayor, Richard J. Daley, intended to showcase his and the city's achievements to national Democrats and the news media. Instead, the proceedings garnered its media attention and notoriety because of the large number of demonstrators and the use of force by the Chicago police during what was supposed to be, as named by Yippie activist organizers, “A Festival of Life.” The rioting, which then took place between demonstrators and the Chicago Police Department and the Illinois National Guard, was well publicized by the mass media, some of whose members experienced firsthand what the protestors at Chicago also suffered. Respected newsmen of the day, Mike Wallace and Dan Rather, were both roughed up by the Chicago police while inside the halls of the Democratic Convention.

The keynote speaker was Daniel Inouye, a U.S. senator from Hawaii.

Some confrontations are planned. Some are spontaneous. This one was planned, but nothing happened the way it was supposed to. Many months before the Chicago convention, experienced movement activists decided that it would be an ideal place to confront "the system" and demand an end to the Viet Nam war. They invited one hundred thousand people to come and demonstrate. The City of Chicago responded by refusing to grant permits for any marches and for only one rally. 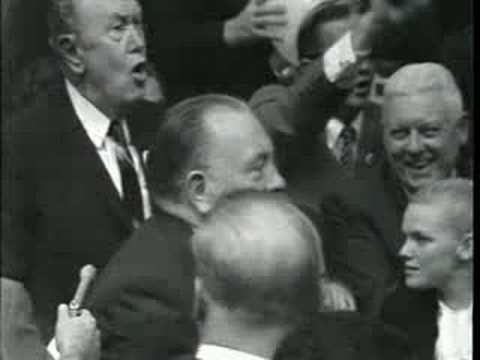