The 1968 Stanley Cup Final was a best-of-seven series between the Montreal Canadiens and the St. Louis Blues.

The Canadiens would sweep the series in four-straight games, in the first Stanley Cup series after the NHL expansion to 12 teams.

This was the first Stanley Cup championship after the 1967 expansion. All of the new teams were placed in the Western Division, and the playoffs were organized so that divisional champions would play off for the Stanley Cup. Montreal defeated Boston and Chicago to advance to the finals as the East Division champion. St. Louis would defeat Philadelphia and Minnesota to advance to the finals as the West Division champion.

Game three
Glenn Hall was sensational, especially in game three when the Blues were outshot 46 to 15. Wrote Red Burnett, the dean of hockey writers then: "A number of Hall's saves were seemingly impossible. Experts walked out of the Forum convinced no other goaltender had performed so brilliantly in a losing cause." In the overtime of game three, Hall made a spectacular save on Dick Duff and then, standing on his head, made another save. "It was a heartbreaker to see" said Burnett "After the saves on Duff, Bobby Rousseau came and batted home the second rebound." Hall's heroics won him the Conn Smythe Trophy as the most valuable player in the playoffs.[citation needed]

Game four
However, Montreal was not to be denied and won the Stanley Cup in game four as J. C. Tremblay fired home the winning goal. When the game ended, the fans came on the ice to celebrate, and balloons, hats and programs were thrown from the stands. Jean Beliveau, in a cast and crutches from his broken ankle, with Ralph Backstrom accepted the Cup from NHL president Clarence Campbell and the players did a victory lap with the Cup.

Aftermath
Less than 30 minutes after the Canadiens won the Cup, Canadiens coach Toe Blake announced his retirement. He gave reason that it had been a hard season, but the real reason was that his wife was dying of cancer and he wanted to spend his time with her. The celebration turned to a mournful event with players paying tribute to Blake, many in tears.

This was the first season for the NHL's six new teams. Expansion introduced a longer regular season and playoff schedule. The Montreal Canadiens, after losing in 1967 to Toronto, were able to sweep the first expansion team to reach the finals, the St. Louis Blues. The Canadiens lost only one game in the playoffs, and handed the Blues a ticket back to St. Louis with a 3-2 win in Montreal in game four. This would be the eighth and last Stanley Cup for legendary coach Hector "Toe" Blake. The Conn Smythe Trophy was awarded to a player on the losing team for the second time in history. St. Louis goaltender Glenn Hall captured the prize, playing in 18 games and posting a 2.43 goals-against average.

Entering the playoffs on the strength of their regular season title, the Habs begin the first round with confidence and face the Boston Bruins in the postseason for the first time since losing to the Canadiens in the 1958 Stanley Cup Final.

During the regular season, Toe Blake’s squad maintained a record of five wins and five losses against Boston. Those five defeats are the only ones the team will suffer at the Bruins’ hands that season as the Canadiens sweep the series in four straight.

In their semifinal, the Canadiens take on the Chicago Blackhawks, who beat the New York Rangers in the other Eastern quarterfinal.

The Habs continue their streak and win three more games, including the first of the series by a score of 9-2, backing the Blackhawks into a corner. Chicago avoids elimination with a 2-1 win in Game 4. Montreal, however, dashes the Blackhawks’ comeback hopes in the following game when Jacques Lemaire scores the winning goal in overtime to give the Canadiens a 4-3 victory.

Winners of the other semifinal, the expansion St. Louis Blues, coached by Scotty Bowman, reach the Stanley Cup Final in their first season in the league after eliminating Philadelphia and Minnesota. The Blues’ playoff celebrations come to an abrupt end in the Final as the Canadiens sweep the series in four straight games to capture the team’s 15th Stanley Cup.

The short series belies the closeness of the games, with all four being decided by just one goal. Yvan Cournoyer, Serge Savard, and Bobby Rousseau, in overtime, and Jean-Claude Tremblay in regulation account for the game-winning goals throughout the Finals.

It is the eighth and final Stanley Cup behind the Canadiens’ bench for Toe Blake, who also won three Cups during his playing career. 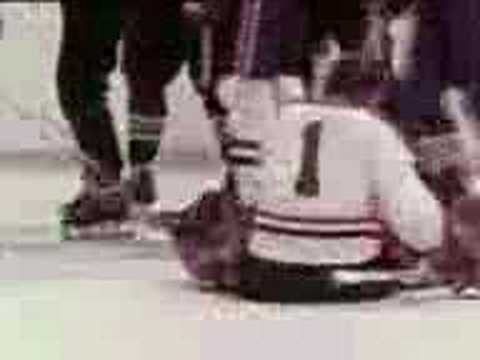 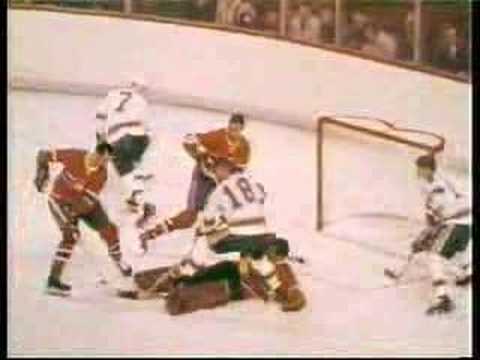