The workers had staged a walkout on February 11, 1967, to protest unequal wages and working conditions. At the time, the city of Memphis paid black workers significantly lower wages than whites. In addition, unlike their white counterparts, blacks received no pay if they stayed home during bad weather; consequently, most blacks were compelled to work even in driving rain and snow storms.

On April 3, King returned to Memphis to address a gathering at the Mason Temple (World Headquarters of the Church of God in Christ). His airline flight to Memphis was delayed by a bomb threat against his plane. With a thunderstorm raging outside, King delivered the last speech of his life, now known as the "I've Been to the Mountaintop" address. As he neared the close, he made reference to the bomb threat:

And then I got to Memphis. And some began to say the threats... or talk about the threats that were out. What would happen to me from some of our sick white brothers?

Well, I don't know what will happen now. We've got some difficult days ahead. But it doesn't matter with me now. Because I've been to the mountaintop. [applause] And I don't mind. Like anybody, I would like to live a long life. Longevity has its place. But I'm not concerned about that now. I just want to do God's will. And He's allowed me to go up to the mountain. And I've looked over. And I've seen the promised land. I may not get there with you. But I want you to know tonight, that we, as a people, will get to the promised land! [applause] And so I'm happy, tonight. I'm not worried about anything. I'm not fearing any man. Mine eyes have seen the glory of the coming of the Lord!

King was booked in room 306 at the Lorraine Motel in Memphis, owned by black businessman Walter Bailey (and named after his wife). King's close friend and colleague, Reverend Ralph David Abernathy, who was present at the assassination, told the House Select Committee on Assassinations that King and his entourage stayed in room 306 at the Lorraine Motel so often that it was known as the "King-Abernathy Suite."

According to biographer Taylor Branch, King's last words were to musician Ben Branch, who was scheduled to perform that night at an event King was going to attend: "Ben, make sure you play 'Take My Hand, Precious Lord' in the meeting tonight. Play it real pretty."

At 6:01 p.m. on April 4, 1968, while he was standing on the motel's second floor balcony, King was struck by a single bullet fired from a rifle. The bullet travelled through the right side of his neck, smashing his throat and then going down his spinal cord before lodging in his shoulder.

King was rushed to St. Joseph's Hospital, where doctors opened his chest and performed manual heart massage. He was pronounced dead at 7:05 p.m. According to biographer Taylor Branch, King's autopsy revealed that though he was only 39 years old, he had the heart of a 60 year old man.

At 6:01 p.m. on April 4, 1968, a shot rang out. Dr. Martin Luther King, Jr., who had been standing on the balcony of his room at the Lorraine Motel in Memphis, TN, now lay sprawled on the balcony's floor. A gaping wound covered a large portion of his jaw and neck. A great man who had spent thirteen years of his life dedicating himself to nonviolent protest had been felled by a sniper's bullet.

Violence and controversy followed. In outrage of the murder, many blacks took to the streets across the country in a massive wave of riots. The FBI investigated the crime, but many believed them partially of fully responsible for the assassination. A man was arrested, but many people, including some of Martin Luther King Jr.'s own family, believe he was innocent.

What happened that evening? 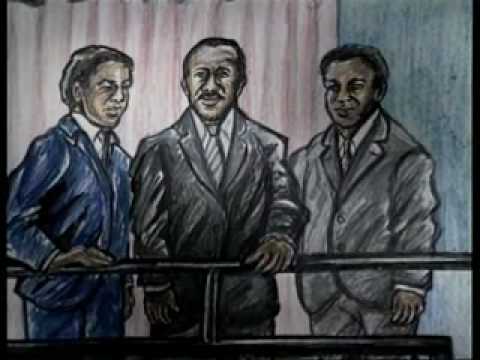