"Romeo And Juliet" Is Released

The film was directed by Franco Zeffirelli, and stars Leonard Whiting and Olivia Hussey. It won Academy Awards for Best Cinematography and Best Costume Design; it was also nominated for Best Director and Best Picture. Sir Laurence Olivier spoke the film's prologue and epilogue and reportedly dubbed the voice of the Italian actor playing Lord Montague, but was never credited in the film.

Director Franco Zeffirelli's 1968 version of Shakespeare's Romeo and Juliet was touted at the time of its release (successfully, if the box-office receipts are any indication), as something of a "youth trip" movie. This is because Zeffirelli broke the long-standing tradition of casting over-aged, sometimes grey-haired players in the title roles. Seventeen-year-old Leonard Whiting plays Romeo, with 15-year-old Olivia Hussey as Juliet. The youthfulness and inexperience of the leading players works beautifully in the more passionate sequences (some of these breaking further ground by being played in the nude). Among the younger players are Michael York as Tybalt and John McEnery as Mercutio. The duel between Romeo and Tybalt starts out as a harmless, frat-boy exchange of insults, then escalates into tragedy before any of the participants are fully aware of what has happened. Photographed by Pasqualino DeSantis on various locations in Italy, Romeo and Juliet was one of the most profitable film adaptations of Shakespeare ever produced. Its most lasting legacy is its popular main theme music, composed by Nino Rota. ~ Hal Erickson, All Movie Guide 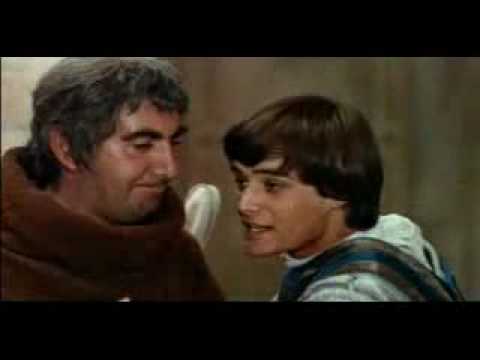