The 910 was only raced for about one year by the factory, and quite successful during that time. The main class rivals Ferrari Dino 206P were mostly beaten now, but overall victories on fast tracks against the more powerful Ford GT40 and Ferrari Prototypes were still not hope for - yet. On twistier ones like the Targa Florio, another victory was expected though, and the 910s dutifully delivered a 1-2-3 win in 1967.

At the 1000 km Nürburgring in 1967, as fleet of 6 factory cars were entered in an attempt to score the first overall win in Porsche's home event. Two of the three 8-cyl broke, and the remaining one finished 4th. The three 6-cyl won 1-2-3, though, giving Porsche its first outright win in a third major event of the World Sportscar Championship for Porsche, after the 1956 Targa Florio and the 12 Hours of Sebring in 1960.

In hillclimbing, the career of the short and light open-top 910 "Bergspyder" version with its 8-cylinder continued, winning the 1967 and 1968 European championships. At the hillclimb of Ollon-Villars, which counted towards the World Sportscar Championship in 1967, the 910 even scored a 1-2, with Gerhard Mitter and Rolf Stommelen beating Herbert Müller and his big V12-Ferrari P.

The Porsche 910 was a purpose built racing car designed specifically for international endurance racing. This particular chassis 006, for vehicle number 39, was originally used by Porsche to test brakes and suspension for the factory.

Chassis 006 competed in the 1967 Targa Florio Race, driven by Magliari and Schutz. In 1969, driven by two French privateers, the car finished first in class in the 24 hours of Le Mans. The car was later sold and converted to a Spyder for use in German hill climb competition.

Purchased by Rick Grant and Howard Cherry, from a Conneticut physician collector, the car underwent a 10-month restoration that included a new body in the original coupe configuration. Crashed in its maiden vintage outing, while leaing in the pouring rain at Watkins Glen, the car has been totally restored for vintage endurance competition. 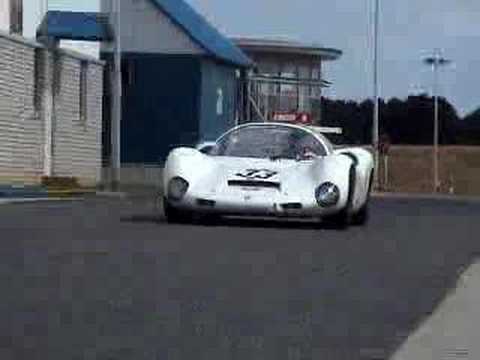