Blowup (as shown in the screen credits, also rendered as Blow-Up on promotional and packaging materials) is a 1966 British-Italian film directed by Michelangelo Antonioni, that director's first English language film.

It tells the story of a photographer's accidental and incidental involvement with a murder. The film was inspired by the 1959 short story "Las babas del diablo" (i.e. "The devil's drool/drivel") by Argentinian writer Julio Cortázar, and by the work, habits, and mannerisms of Swinging London photographer David Bailey. The film was scored by jazz pianist Herbie Hancock, although the music is mimetic as it is played on a record by the main character. Nominated for several awards at the Cannes Film Festival, Blowup won the Grand Prix.

Italian director Michelangelo Antonioni's first English-language production was also his only box office hit, widely considered one of the seminal films of the 1960s. Thomas (David Hemmings) is a nihilistic, wealthy fashion photographer in mod "Swinging London." Filled with ennui, bored with his "fab" but oddly-lifeless existence of casual sex and drug use, Thomas comes alive when he wanders through a park, stops to take pictures of a couple embracing, and upon developing the images, believes that he has photographed a murder. Pursued by Jane (Vanessa Redgrave), the woman who is in the photos, Thomas pretends to give her the pictures, but in reality, he passes off a different roll of film to her. Thomas returns to the park and discovers that there is, indeed, a dead body lying in the shrubbery: the gray-haired man who was embracing Jane. Has she murdered him, or does Thomas' photo reveal a man with a gun hiding nearby? Antonioni's thriller is a puzzling, existential, adroitly-assembled masterpiece. ~ Karl Williams, All Movie Guide 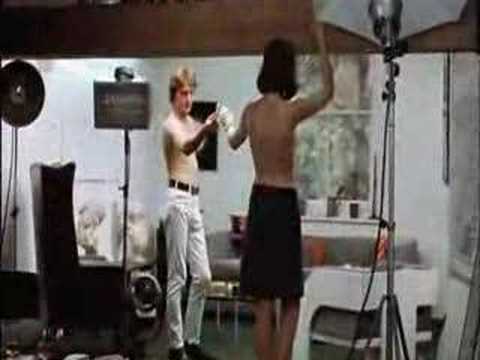