This brilliant field general had a tremendous gridiron career that spanned 31 games. He completed 392 passes out of 692 attempts for a total yardage of 4,848, which included 37 touchdowns and picked up 442 yards rushing. Steve was the number one draft choice of the San Francisco ‘49ers where he played for nine years spelling John Brodie as quarterback in 1972 and leading the ‘49ers to a third consecutive NFC West Title. His best day as a quarterback came against Minnesota in 1973 when he completed 31 out of 48 attempts for 320 yards. In the great ’72 season he threw for five touchdown passes against Chicago to tie Brodie and Albert for the record. He was head coach at the collegiate level for 15 years. At Duke University he was 20-13-1 and won the ACC Championship in 1989, Duke’s first in 27 years. While head coach at his alma mater, Florida, his team won the SEC Championship in 1990, ’91, ’93, ’94, ’95, ’96 & 2000. His record at Florida was 122-27-1 for 12 years. This makes him the winningest coach in his tenure at one school in NCAA history. His teams have also won the SEC Conference Championship in seven of his 12 years. He is a member of the Orange Bowl Hall of Fame, the Gator Bowl Hall of Fame, and the Tennessee Sports Hall of Fame. He is currently the Head Football Coach at the University of South Carolina. He has been married to the former Jerri Starr for 39 years. They have four children, Lisa Amy, Steve, Jr. and Scotty, and seven grandchildren, Trey Gatson King, Davis Graham King, Jake Moody, Kyle Spurrier Moody, Lauren Moody Gavin Spurrier, Luke Spurrier and Emma Spurrier.

Elected to the National Football Foundation and College Hall of Fame in 1986.

Florida's Steve Spurrier took every section except for the Midwest, which went to Bob Griese of Purdue. Griese's second-place finish started a succession of near misses for Boilermaker players, who finished third, second and second again over the next three seasons.

Stephen "Steve" Orr Spurrier (born April 20, 1945) is a former college and professional football player, and is the current head coach of the University of South Carolina Gamecocks football team. He was a two-time All-American quarterback, and was inducted into the College Football Hall of Fame as a player. Spurrier is best known for winning the Heisman Trophy in 1966, and for coaching the University of Florida Gators football team to six Southeastern Conference (SEC) championships and a consensus national championship in 1996.

Spurrier was a three-sport letterman in high school, starring in football, basketball and baseball at Science Hill High School in Johnson City, Tennessee.[1] In three years as the starting pitcher for Science Hill, he never lost a game and led his team to two consecutive state baseball championships.[1] He was an all-state selection in football, basketball and baseball, and a prep All-American quarterback.[1]
After graduating from Science Hill, Spurrier played quarterback for coach Ray Graves at the University of Florida,[1] where he won the Heisman Trophy in 1966.[2] In addition to being a stellar passer, he gained notoriety by waving off the starting place-kicker and booting a 40-yard field goal to defeat Auburn 30–27 in a key game during his senior season.[2] Spurrier finished his three-year, 31-game career as Florida's starting quarterback having completed 392 of 692 attempts, with 4,848 passing yards, 37 touchdowns and 442 yards rushing.[2] In addition to winning the Heisman, he was selected as a first-team All-American in 1965 and 1966.[3]
The San Francisco 49ers selected Spurrier in the first round of the 1967 NFL Draft.[4] Spurrier played for the 49ers for nine seasons, mostly as a backup to John Brodie, before being traded to the Tampa Bay Buccaneers expansion team for his final NFL season in 1976.[5] He played his best game as an NFL quarterback against the Minnesota Vikings in 1973, when he completed 31 of 48 attempts for 320 yards.[2] During his ten-year NFL career, Spurrier played in 106 games, completing 597 passes in 1,151 attempts, for a total of 6,878 yards and 40 touchdowns. 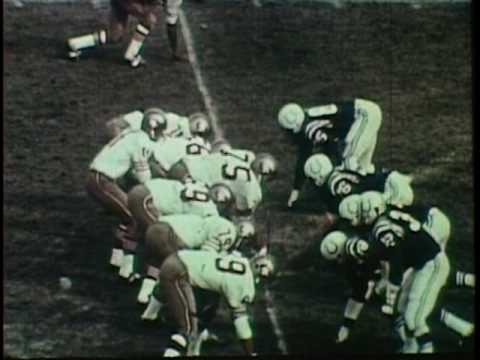