The 1966 Flood of the River Arno in Florence killed many people and damaged or destroyed millions of masterpieces of art and rare books in Florence.

It is considered the worst flood in the city's history since 1557. With the combined effort of Italian citizens and foreign donors and committees, or angeli del fango ("Mud Angels"), many of these fine works have been restored. New methods in conservation were devised and restoration laboratories established. However, even decades later, much work remains to be done.

The flood has had a lasting impact on Florence, economically and culturally. City officials and citizens were extremely unprepared for the storm and the widespread devastation that it caused. There were virtually no emergency measures in place, at least partially due to the fact that Florence is located in an area where the frequency of flooding is relatively low. In fact, approximately 90% of the city's population were completely unaware of the imminent disaster that would befall them as they were sleeping during the early hours of November 4, 1966.

Residents were set to celebrate their country's World War I victory over the Austrians on November 4, Armed Forces Day. In commemoration, businesses were closed and many of their employees were out of town for the public holiday. While many lives were likely spared as a result, the locked buildings greatly inhibited the salvaging of valuable materials from numerous institutions and shops, with the exception of a number of jewellery stores whose owners were warned by their nightwatchmen.

Tragically, 5,000 families were left homeless by the storm, and 6,000 stores were forced out of business. Approximately 600,000 tons of mud, rubble and sewage severely damaged or destroyed numerous collections of the written work and fine art for which Florence is famous. In fact, it is estimated that between 3 and 4 million books/manuscripts were damaged, as well as 14,000 movable works of art.

On November 4, 1966 the Arno River, already a swollen stream at that time, literally invaded Florence and left in its wake a tale of violent destruction as well as one of profound sadness. I cannot easily recall our first reaction when we realized that our Museum was being inundated by a floating mixture of mud, broken furniture, parts of trees, and empty bottles. It was not personal fear, of course, but a feeling of dismay and helplessness as I witnessed so great a disaster without any possibility of saving the many things I knew should be saved. I was obliged to watch the destruction of historical instruments I had collected and restored over many years. 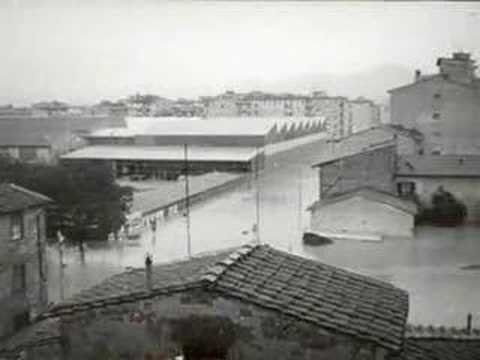