'Fox In Socks' is Published

When it comes to rhyming and tongue twisters, Dr. Seuss is without doubt the master in his field.

His children’s book, titled Fox in Socks, portrays an energetic character who continually speaks in tongue twisters- and nothing else. His companion, Mr. Knox, is a grumpy individual who resist’s Fox’s attempts to draw him into the game. At the end, Knox defiantly turns the tables in a long string of rhymes which confound Fox, thereby winning the game.

The book was published in 1965 and has been adapted at least in part to more than one television specials, one of them “The Wubbolous World of Dr. Seuss,” which featured the two characters in recurring episodes.

The book begins by introducing the main characters, Fox and Knox (sometimes called "Mr. Fox" and "Mr. Knox") together with some props (a box and a pair of socks). After taking those four rhyming items though several permutations, more items are added (chicks, bricks, blocks, clocks), and so on. As the book progresses the Fox describes each situation with rhymes that progress in complexity, with Knox periodically complaining of the difficulty of the tongue-twisters.

Finally, after the Fox gives an extended dissertation on "Tweetle Beetles" who fight (battle) with paddles while standing in a puddle inside a bottle ("a Tweetle Beetle Bottle Puddle Paddle Battle Muddle"), Knox finally pushes the Fox into the bottle and recites a tongue-twister of his own:

"When a fox is in the bottle where the tweetle beetles battle with their paddles in a puddle on a noodle-eating poodle, THIS is what they call...
...a tweetle beetle noodle poodle bottled paddled muddled duddled fuddled wuddled fox in socks, sir!"

Knox then declares that the game is finished, thanking the Fox for the fun, and walks away while the beetles, the poodle, and the stunned Fox look on. 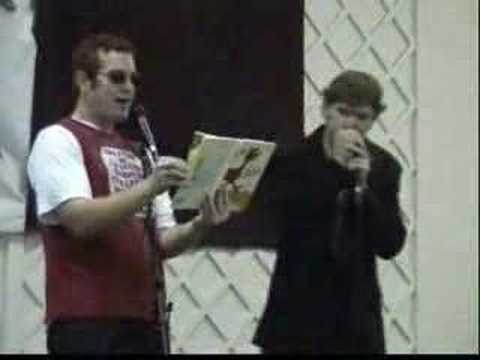