Unfortunately, the excesses of the Futura seemed woefully at odds with the design ethics of the Sixties.

And so it happened that the unwanted car ended up in the possession of George Barris. In 1965, Barris was commissioned to build the Batmobile for ABC's upcoming Batman TV series. But because the show was about to go into production, he had only three weeks to build it. He quickly realized it didn't take much work to modify the Futura for the part. While retaining the chassis and the basic shape of the car, Barris overhauled the nose and tail with numerous bat like shapes and references. Barris in '66 would assemble 3 more Batmobiles using bodies based on the prototype mold and built on a production car chassis.

The Futura was a success as a show car, garnering a great deal of favorable publicity for Ford. It was released as a model kit and a toy, and in a much more subdued form its headlight and tailfin motifs would appear on production Lincolns for 1956 and 1957. It even played a prominent part in a movie, 1959's It Started with a Kiss, starring Debbie Reynolds and Glenn Ford. For the movie, it was painted red, as the pearlescent finish did not photograph well.

After that, though, the car would logically have been forgotten and perhaps destroyed, as most show cars of that time were. However, it was somehow sold into the hands of George Barris, one of the great auto customizers. As the car was never titled and was therefore uninsurable, it was parked behind Barris' shop where it sat idle for several years and was allowed to deteriorate.

In 1966 Barris was requested to design a theme car for the Batman television series, Barris then contracted stylist Dean Jeffries to build a car for the show. Jeffries worked on the design and initial fabrication for the Batmobile, using a 1959 Cadillac, but when the studio wanted the car faster than he could deliver, he turned it back to George Barris. With the short notice, Barris thought the Futura might work well, and using Jeffries initial car, decided that its unusual winged shape would be an ideal starting point for the Batmobile. Barris hired Bill Cushenberry to do the metal modifications to the car.

Barris went on to build five duplicates for the show circuit, three of which are covered with a felt-like finish. For the filming of the Batman Series, Barris replaced the Lincoln frame and engine with 1966 Ford Galaxie parts.

The Batmobile is the automobile of DC Comics superhero Batman. The car has evolved along with the character from comic books to television and films. Kept in the Batcave, which it accesses through a hidden entrance, the Batmobile is a gadget-laden vehicle used by Batman in his crime-fighting activities.

Batman first drove in Detective Comics #27 (May, 1939). A sedan, the vehicle was simply referred to as "his car". It soon began featuring an increasingly prominent bat motif, typically including distinctive wing-shaped tailfins. In the early stages of Batman's career, he modified it with armor and technologically-advanced automotive customization and turned the Batmobile into a sleek street machine. The Batmobile has gone through numerous incarnations, and as state-of-the-art technology has continued to advance, the vehicle has had to change to stay a step ahead of real-life cutting edge advances.

In the late summer of 1965, an all-new Batman TV series was gearing up, with Dean Jeffries hired to build a Batmobile for the show. When the show's production schedule was moved up, Jeffries had to pass on the job, which then went to custom car builder George Barris. With merely three weeks to build the car, Barris decided to use the Ford Motor Company's abandoned Futura concept car as a basis for what would go on to become one of the most famous cars in the world.

The Futura worked perfectly as a Batmobile, as it had many "bat" features built into the design already, such as the long fins and bubble canopies. According to Barris, he further enhanced the theme by converting the nose into an integrated bat mask, a first for the car. He also opened the wheel wells, and modified the Futura's fins into subtle bat wings by extending their leading edges into the doors and scalloping the trailing edges. Once bodywork was complete, the car was painted gloss black with red trim to accentuate the various lines of he car. Three replicas were eventually built by Barris' shop, though only one appeared on the show itself.

The car featured an impressive array of bat-gadgets. In addition to the "atomic turbine engine" (the car was actually powered by a blueprinted Ford V8), the car had a nose-mounted chain slicer, lasers, rockets, an on-board telephone, radar, dash monitor, on-board computer, and police beacon. If needed, the Batmobile is capable of a quick 180° "bat-turn" thanks to two rear-mounted 10' parachutes, and the it is equipped with a smoke emitter and a nail spreader to discourage pursuit. Some changes were made during the run of the series, including different license plates, a change in steering wheel, and the addition of extra gadgets such as the rear-facing camera and battering ram. 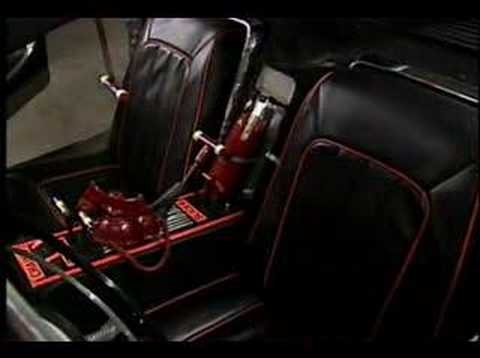