A wide outbreak of 37 tornadoes killed 256 people, mostly in Ohio, Michigan, and Indiana on Palm Sunday 1965.

This was deadliest tornado outbreak in 33 years in the United States and has been exceeded since only by the April 1974 outbreak. The 55 people killed in Ohio on April 11, 1965, made this the second deadliest tornado day in Ohio history, after the 1924 Lorain Tornado. The only tornado on April 11 to touch down in a large city hit Toledo at about 9:30 PM. It cut a six-mile long path across the northern edge of Toledo. A bus on Interstate 75 was lifted and smashed upside down, killing five occupants. Homes were leveled, swept clean to their foundations, and debris scattered hundreds of yards by this F-4 tornado. Eight people were killed in their homes. A family of violent tornadoes crossed the state from the Indiana line in Mercer County to suburban Cleveland.

The Palm Sunday Tornado Outbreak occurred on April 11th, 1965 with the violent storms tearing through much of the Southern Great Lakes Region and Northern Ohio Valley. The worst hit states were Michigan, Indiana and Ohio. It is the second biggest tornado outbreak on record; 47 confirmed tornadoes resulted in 271 people killed and 3,400 people injured in just a twelve hour span. Damages from the storms mounted to more than 200 million dollars (1.1 billion/2003 dollars). Only the "Super Outbreak" of April 3rd, 1974 was worse.

On Palm Sunday, 11 April 1965, the United States reeled under the largest single-day outbreak of tornadoes documented to date in its history. On that day, 47 confirmed tornadoes struck the states of Iowa, Wisconsin, Illinois, Indiana, Michigan and Ohio. (The event is now the second greatest outbreak, surpassed by the April 1974 Super Outbreak.) Across these states, the 12-hour long tornado rampage killed 271 people, injured nearly 3500 more, and incurred property damage that reached over a quarter billion dollars at the time. An adjustment to current dollar value would peg the damage at over $1.6 billion.

The event would have major influences on my life, though I was not at any of the tornado touchdowns, being about 20 miles (32 km) south of the most destructive to hit Northern Illinois that day: The Crystal Lake-Island Lake member of the eastern Illinois-Wisconsin family in the outbreak swooped down through my uncle's neighbourhood, causing almost complete devastation across the street. Fortunately, my aunt, uncle and two cousins were not at home, so there were no physical injuries suffered to them. Their house, however, was a mess.

The second Palm Sunday tornado outbreak occurred on April 11, 1965 and involved 47 tornadoes (15 significant, 17 violent, 21 killers) hitting the Midwest. It was the second biggest outbreak on record. In the Midwest, 271 people were killed and 1,500 injured (1,200 in Indiana). It was the deadliest tornado outbreak in Indiana history with 137 people killed. The outbreak also made that week the second most active week in history with 51 significant and 21 violent tornadoes. 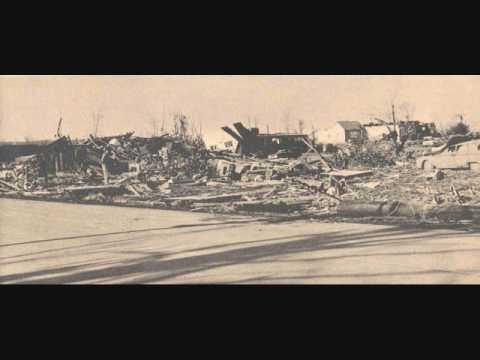