Anchorage, about 120 kilometers northwest of the epicenter, sustained the most severe damage to property. About 30 blocks of dwellings and commercial buildings were damaged or destroyed in the downtown area. The J.C. Penny Company building was damaged beyond repair; the Four Seasons apartment building, a new six-story structure, collapsed; and many other multistory buildings were damaged heavily. The schools in Anchorage were almost devastated. The Government Hill Grade School, sitting astride a huge landslide, was almost a total loss. Anchorage High School and Denali Grade School were damaged severely. Duration of the shock was estimated at 3 minutes.

Landslides in Anchorage caused heavy damage. Huge slides occurred in the downtown business section, at Government Hill, and at Turnagain Heights. The largest and most devastating landslide occurred at Turnagain Heights. An area of about 130 acres was devasted by displacements that broke the ground into many deranged blocks that were collapsed and tilted at all angles. This slide destroyed about 75 private houses. Water mains and gas, sewer, telephone, and electrical systems were disrupted throughout the area.

The 1964 earthquake caused 115 deaths in Alaska alone, with 106 of these due to tsunamis which were generated by tectonic uplift of the sea floor, and by localized subareal and submarine landslides. The earthquake shaking caused at least 5 local slide generated tsunamis within minutes after the shaking began. (In general, slide/slump induced tsunamis are generated within a few minutes after an earthquake starts.) These five occurred at Valdez(2), Seward, Whittier, and Kachemak Bay. As an example and in brief summary: In Seward, a section of the water front (1070m) slid into the Resurrection Bay due to the earthquake shaking. This created a local tsunami causing much damage and the spreading of oil which was on fire and floating on the water. About 20 minutes after this occurred, the first wave of the main tsunami arrived. The 11-13 fatalities in Seward were due to the local and the main tsunami.

Tsunamis generated by the 1964 earthquake (and their subsequent damage, loss of life, etc.) were recorded throughout the Pacific (Lander and Lockridge, 1989). This was the most disastrous tsunami to hit the U.S. West Coast and British Columbia in Canada. The largest wave height for this tsunami was reported at Shoup Bay, Valdez Inlet (67 meters). Summary of lives lost and damage for Alaska, Canada, Washington, Oregon and California are: Alaska- 106 deaths and $84 million; British Columbia- $10 million; Washington- minor damage throughout the coast; Oregon- 4 deaths and $0.7 million, with much of the damage away from the coast where rivers overflowed; California- 13 deaths and $10 million damage. Many places that reported damage or lives lost are given below. To view the tsunami travel time map for the earthquake click here. Additionally, the single amplitude (0-peak) wave heights and/or tsunami runup in meters showing the various pacific-wide locations where tsunamis were recorded are given below. 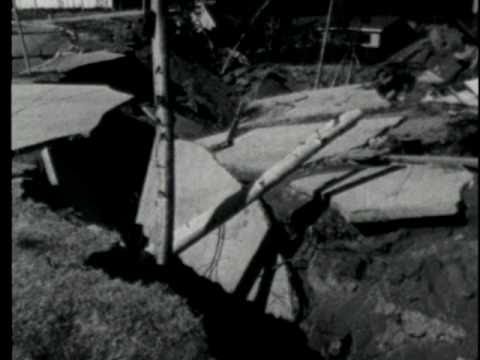