He defeated boxers such as Tony Esperti, Jim Robinson, Donnie Fleeman, Alonzo Johnson, George Logan, Willi Besmanoff, Lamar Clark (who had won his previous 40 bouts by knockout), Doug Jones and Henry Cooper.
Clay built a reputation by correctly predicting the round in which he would "finish" several opponents, and by boasting before his triumphs. Clay admitted he adopted the latter practice from "Gorgeous" George Wagner, a popular professional wrestling champion in the Los Angeles area who drew thousands of fans. Often referred to as "the man you loved to hate," George could incite the crowd with a few heated remarks, and Ali followed suit.
Among Clay's victims were Sonny Banks (who knocked him down during the bout), Alejandro Lavorante, and the aged Archie Moore (a boxing legend who had fought over 200 previous fights, and who had been Clay's trainer prior to Angelo Dundee). Clay had considered continuing using Moore as a trainer following the bout, but Moore had insisted that the cocky "Louisville Lip" perform training camp chores such as sweeping and dishwashing. He also considered having his idol, Sugar Ray Robinson, as a manager, but instead hired Dundee.
Clay first met Dundee when the latter was in Louisville with light heavyweight champ Willie Pastrano. The teenaged Golden Gloves winner traveled downtown to the fighter's hotel, called Dundee from the house phone, and was asked up to their room. He took advantage of the opportunity to query Dundee (who was working with, or had, champions Sugar Ramos and Carmen Basilio) about what his fighters ate, how long they slept, how much roadwork (jogging) they did, and how long they sparred.
Following his bout with Moore, Clay won a disputed 10-round decision over Doug Jones in a matchup that was named "Fight of the Year" for 1963. Clay's next fight was against Henry Cooper, who knocked Clay down with a left hook near the end of the fourth round. The fight was stopped in the fifth due to deep cuts over Cooper's eyes.
Despite these close calls, Clay became the top contender for Sonny Liston's title. Despite his impressive record, however, he was not widely expected to defeat the champ. The fight was scheduled for February 25, 1964 in Miami, Florida, but was nearly canceled when the promoter, Bill Faversham, heard that Clay had been seen around Miami and in other cities with the controversial Malcolm X. At the time, The Nation of Islam—of which Malcolm X was a member—was labeled as a hate group by most of the media. Because of this, news of this association was perceived as a potential gate-killer to a bout where, given Liston's overwhelming status as the favorite to win (7–1 odds[13]), had Clay's colorful persona and nonstop braggadocio as its sole appeal.
Faversham confronted Clay about his association with Malcolm X (who, at the time, was actually under suspension by the Nation as a result of controversial comments made in the wake of President Kennedy's assassination). While stopping short of admitting he was a member of the Nation, Clay protested the suggested cancellation of the fight. As a compromise, Faversham asked the fighter to delay his announcement about his conversion to Islam until after the fight. The incident is described in the 1975 book The Greatest: My Own Story by Ali (with Richard Durham).
During the weigh-in on the day before the bout, the ever-boastful Clay, who frequently taunted Liston during the buildup by dubbing him "the big ugly bear" (among other things), declared that he would "float like a butterfly and sting like a bee," and, summarizing his strategy for avoiding Liston's assaults, said, "Your hands can't hit what your eyes can't see."
First title fight and aftermath
Main article: Muhammad Ali versus Sonny Liston
At the pre-fight weigh-in, Clay's pulse rate was around 120, more than double his norm of 54. Liston, among others, misread this as nervousness. In the opening rounds, Clay's speed kept him away from Liston's powerful head and body shots, as he used his height advantage to beat Liston to the punch with his own lightning-quick jab.
By the third round, Clay was ahead on points and had opened a cut under Liston's eye.[14] Liston regained some ground in the fourth, as Clay was blinded by a substance in his eyes. It is unconfirmed whether this was something used to close Liston's cuts, or deliberately applied to Liston's gloves; however, Bert Sugar (author, boxing historian and insider) has recalled at least two other Liston fights in which a similar situation occurred, suggesting the possibility that the Liston corner deliberately attempted to cheat.
Liston began the fourth round looking to put away the challenger. As Clay struggled to recover his vision, he sought to escape Liston's offensive. He was able to keep out of range until his sweat and tears rinsed the substance from his eyes, responding with a flurry of combinations near the end of the fifth round. By the sixth, he was looking for a finish and dominated Liston. Then, Liston shocked the boxing world when he failed to answer the bell for the seventh round, later claiming a shoulder injury as the reason. At the end of the fight, Clay boasted to the press that doubted him before the match, proclaiming, "I shook up the world!"
When Clay beat Liston, he was the youngest boxer (age 22) ever to take the title from a reigning heavyweight champion, a mark that stood until the mid 1980s. At the time, Floyd Patterson (dethroned by Liston) had been the youngest heavyweight champ ever (age 21), but he won the title during an elimination tournament following Rocky Marciano's retirement by defeating Archie Moore, the light-heavyweight champion at the time.

On February 25, 1964, underdog Cassius Clay, age 22, defeats champion Sonny Liston in a technical knockout to win the world heavyweight boxing crown. The highly anticipated match took place in Miami Beach, Florida. Clay, who later became known to the world as Muhammad Ali, went on to become the first fighter to capture the heavyweight title three times.
Liston was a reserved, feared fighter, a decade older than Cassius Clay, and had been world heavyweight champ since defeating Floyd Patterson in 1962. By contrast, Clay was a mouthy underdog who had won a gold medal in the light heavyweight division at the 1960 Olympics in Rome. While training for their fight, Clay, a natural self-promoter, taunted Liston and boasted to reporters that he would win by knockout. Clay came out strong during the fight, using speed and footwork to his advantage against the slower Liston. After the sixth round, Liston, who was suffering from cuts and bruises under his eyes and an apparent injured shoulder, announced he couldn’t continue. Clay won the match by technical knockout and then announced to the world, “I am the greatest!”
On May 25, 1965, the two fighters met in Lewiston, Maine, for a rematch. The bout ended with a highly controversial first-round knockout for Clay, who by then had become a member of the Nation of Islam and taken a Muslim name, Muhammad Ali. Some people claimed Liston threw the fight, possibly because he was controlled by the Mafia or because he feared retaliation from Black Muslim extremists.
In 1967, while America was at war in Vietnam, Ali refused for religious reasons to join the Army. As a result, he was convicted of draft dodging, stripped of his title and banned from boxing for three years. In 1971, the U.S. Supreme Court reversed his conviction and Ali reclaimed the heavyweight crown on January 28, 1974, at the “Rumble in the Jungle” in Zaire against champion George Foreman.
In February 1978, Ali lost the title to Olympic gold medalist Leon Spinks. In a rematch seven months later, Ali defeated Spinks in 15 rounds and to reclaim the heavyweight crown. He then retired. Two years later, he made a brief, unsuccessful comeback before retiring permanently in 1981. Ali’s career record includes 56 wins, 5 losses and 37 knockouts.
Sonny Liston was found dead in his Las Vegas home on January 5, 1971. It’s believed he could have been dead for a week by that time and the cause of his death remains a mystery. During his career, he recorded 50 wins, 39 knockouts and 4 losses.

The fight began with Clay showing a lot of movement, making it difficult for Liston to score with many punches, although he did manage to land some blows. Clay showed a good fast jab and several quick combinations. This pattern continued in the second round. In the third round, however, Clay opened up his attack and hit Liston with several combinations which caused a bruise to form underneath Liston's right eye and a cut to open up under his left eye. During the fourth round Clay coasted, but when he went back to his corner after the round he started complaining to Angelo Dundee that there was something burning in his eyes and that he couldn't see. It has been theorized that it may have been a substance that was used to stop Liston's cuts from bleeding (possibly Monsel's Solution), but this has never been confirmed. At the beginning of the fifth round, Dundee pushed Clay off his stool and told him to stay away from Liston. Clay managed to survive the fifth round and by the sixth round Clay had resumed control of the fight. During the sixth, Clay landed several combinations, seemingly at will. Between the sixth and the seventh rounds Liston told his cornermen that he couldn't continue. He complained of a shoulder injury. As the bell rang for the seventh round Liston remained on his stool, resigned to defeat. Sensing that he had made history, Clay sprang to the center of the ring, did a victory jig and then quickly ran to the ropes, over to the area where many of the sportswriters were. Many of them had doubted that he had any chance to beat the once feared Sonny Liston. Clay yelled at them, "I'm the greatest" and "I shook up the world!"

I'm the greatest! I shook up the world!” 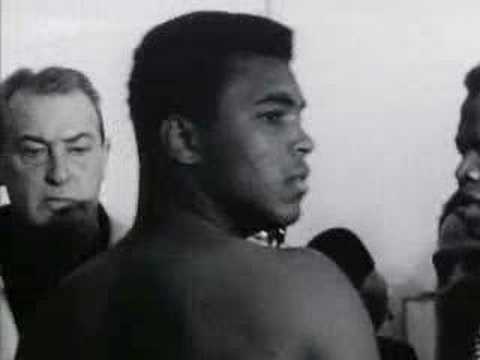 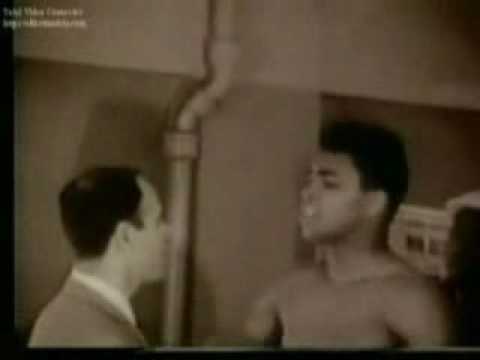