Speaking on Goldwater's behalf, Reagan stressed his belief in the importance of smaller government. He revealed his ideological motivation in a famed speech delivered on October 27, 1964: "The Founding Fathers knew a government can't control the economy without controlling people. And they knew when a government sets out to do that, it must use force and coercion to achieve its purpose. So we have come to a time for choosing." This "Time for Choosing" speech raised $1 million for Goldwater's campaign[15] and is considered the event that launched Reagan's political career.

A Time for Choosing, also known as "The Speech," was presented on a number of speaking occasions during the 1964 U.S. presidential election campaign by future-president Ronald Reagan on behalf of Republican candidate Barry Goldwater.

Many versions of the speech exist, as it was altered during many stops, but two are best known:

* 1964 Republican National Convention - San Francisco, California - Given as a nomination speech for Goldwater.
* As part of a pre-recorded television program titled "Rendezvous with Destiny", broadcast on October 27, 1964.

Following the speech, Ronald Reagan was asked to run for governor of California. To this day, this speech is considered one of the most effective ever made on behalf of a candidate. However, Barry Goldwater still lost the election by one of the largest margins in history. Reagan was later called the "great communicator" in recognition of his effective communication skills. 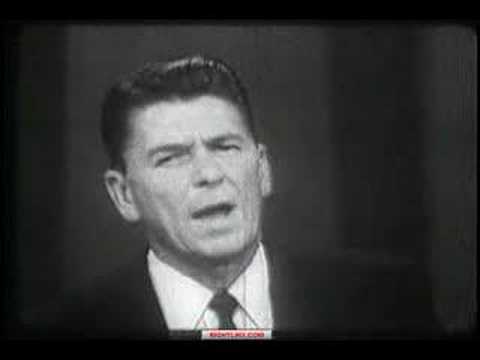