The US President John F Kennedy has received a rapturous welcome on an emotional visit to his ancestral homeland in County Wexford, Ireland.

On the second day of his four-day trip to Ireland, the president travelled by helicopter this morning to County Wexford.

On the occasion of his visit to the Republic of Ireland in 1963, President Kennedy joined with Irish President Éamon de Valera to form The American Irish Foundation. The mission of this organization was to foster connections between Americans of Irish descent and the country of their ancestry. Kennedy furthered these connections of cultural solidarity by accepting a grant of armorial bearings from the Chief Herald of Ireland. Kennedy had near-legendary status in Ireland, due to his ancestral ties to the country. Irish citizens who were alive in 1963 often have very strong memories of Kennedy's momentous visit.[42] He also visited the original cottage at Dunganstown, near New Ross, where previous Kennedys had lived before emigrating to America, and said: "This is where it all began …" On December 22, 2006, the Irish Department of Justice released declassified police documents that indicated that Kennedy was the subject of three death threats during this visit. Though these threats were determined to be hoaxes, security was heightened. 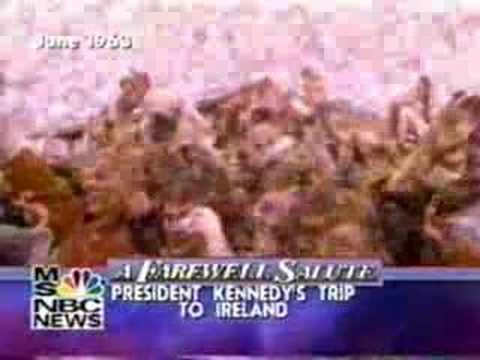