The First Version of Spacewar! is Released

Steve "Slug" Russell, Martin "Shag" Graetz and Wayne Wiitanen of the fictitious "Hingham Institute" conceived of the game in 1961, with the intent of implementing it on a DEC PDP-1 at the Massachusetts Institute of Technology.

After Alan Kotok obtained some sine and cosine routines from DEC, Russell began coding, and by February 1962 had produced his first version. It took approximately 200 hours of work to create the initial version. Additional features were developed by Dan Edwards, Peter Samson and Graetz.

The basic gameplay of Spacewar! involves two armed spaceships called "the needle" and "the wedge" attempting to shoot one another while maneuvering in the gravity well of a star. The ships' fired missiles were unaffected by gravity (due to a lack of processing time). Each ship had a limited number of missiles and a limited supply of fuel. The hyperspace feature could be used as a last-ditch means to evade enemy missiles, but the reentry from hyperspace would occur at a random location and there was an increasing probability of the ship exploding with each use.

Each player controls one of the ships, and must attempt to simultaneously shoot at the other ship and avoid colliding with the star. Player controls included clockwise and counterclockwise rotation, thrust, fire, and hyperspace. Initially these were controlled using the front-panel test switches, with four switches for each player, but these proved to wear out very quickly under normal gameplay. Most sites used custom control boxes wired into the same switches, although joysticks and other inputs were also used. 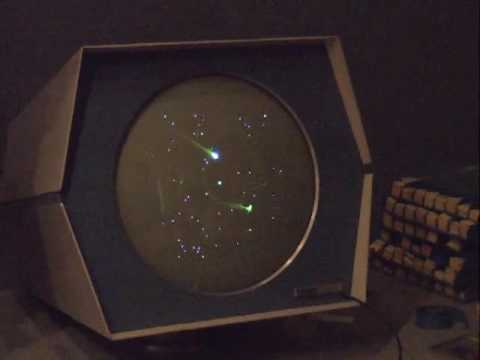