The flat-8 air-cooled engine powered car developed 180 hp at 9,200 rpm gave Porsche its only F1 wins as a chassis maker, at the 1962 French Grand Prix, and at the (non-WC) Solituderennen at Castle Solitude in Stuttgart, both by Dan Gurney. The cylinder dimensions were 66.0 x 54.6 mm giving a displacement of 1,494.38 cc.

Porsche has always had a very rational approach to the company's racing activities; there has always been a justification for the spent resources. The racing cars either served as a rolling laboratory for parts of upcoming production cars or were sold to customers and contributed to the company's revenue. More often than not, it was a combination of the two. That the competition successes also had marketing benefits was just a bonus. Neither justification ground applied to Formula 1 cars; they boasted technology that had little relevance for Porsche's road cars and the market for them was very small. The German manufacturer forgot about all that for a moment. Before they came to their senses, the Type 804 F1 car had raced for a full season.

In all honesty, it was a rule change that 'lured' Porsche into F1. In the late 1950s the German manufacturer ventured out into the popular Formula 2 class. The first Porsche single seater was a center seat version of the 550A sports racers and used an identical four cylinder engine. These were remarkably successful and were quickly followed by a purpose built F2 car. From the start of the 1961 season the F2 regulations were carried over to F1. This brought Grand Prix racing within the reach of Porsche. Many of the leading teams doubted the rules would really be changed and started their preparations late. Although Porsche had a lead start, they only fielded a further development of their four-cylinder F2 car in 1961. Behind the scenes the brand new Type 804 was prepared.

Starting with a clean sheet, Porsche's engineers had the opportunity to explore a wide variety of engine configuration. Having looked at 12 and even 16 cylinder designs, they finally settled for a flat-8. The new Type 753 engine featured a magnesium crankcase with 8 separate cylinders. Each aluminium cylinder sported an aluminium-alloy head assembly of their own. Inside the individual heads were two valves, which were actuated by twin overhead camshafts. In good Porsche practice, the camshafts were driven by the crankshaft through shafts. A shaft was also used to drive the horizontal fan for the air-cooled engine. The components were designed to run at over 10,000 rpm but peak power was initially produced at around 9200. There the 1495 cc engine developed just shy of 180 bhp. That was not quite as much as the competition but the Porsche engine did not have to drag large water radiators through the air.

Mated to a six-speed gearbox, the Type 753 engine was mounted midships in a purpose-built multi-tubular steel spaceframe chassis. The frame was relatively wide to accommodate the flat-8 engine but as a result was also relatively low. Front suspension was through double wishbones, which actuated longitudinal torsion bars. The top wishbone was connected to the shock absorbers, which were mounted vertically and in-board. At the rear a similar configuration was used, although only one torsion bar was used that doubled as an anti-roll bar. Disc brakes of Porsche's own design were fitted front and rear. They were unusual in that they had the caliper mounted on the inside. The rolling chassis was clothed tightly in an aluminium skin. The only interference in the slippery shape was a small hole in the nose for the oil cooler. At 460 kg, the completed machine was just 10 kg overweight.

The first two 804 chassis and eight cylinder engines were ready in time for the season opening Dutch Grand Prix at Zandvoort. The new machines were entered for Dan Gurney and Jo Bonnier. In practice Gurney was 2 seconds faster than he had been the previous season with the four cylinder engined car but he was also 2 seconds adrift of the head of the field. The American suffered a gear-linkage problem early in the race and Bonnier finished a mediocre 7th. More interested in further developing the car, Porsche reluctantly entered a single car at Monaco for Gurney. He qualified a commendable fifth but he was forced to retire after he was hit from behind in the opening lap. The cars were returned to Stuttgart and the less than competitive handling was addressed. The suspension was revised and the chassis reinforced.

The revised cars were first put to the test in the French Grand Prix at Rouen. Gurney and Bonnier qualified 6th and 9th respectively. The competition then paved the way for Porsche's first Formula 1 victory by dropping out one by one. Gurney's 804 survived and crossed the line first, a lap ahead of Tony Maggs in a Climax engined Cooper. There was further success in the non-championship event at Solitude in Germany where Gurney and Bonnier scored a 1-2 victory. While the victories boosted moral, they were no sign of structural improvement. In the remainder of the season Gurney was only competitive at the Nürburgring, where he had extensively tested the Porsche. The tall American led the race from pole position but eventually had to settle for third after the battery had come loose in the cockpit.

Despite the upgrades, the 804's handling still was not up to the level of the British cars. Particularly Lotus was well ahead of Porsche with the revolutionary monocoque chassis that was lighter and more rigid than Porsche's old-fashioned spaceframe. The air-cooled engine was a work of art to look at but proved to be no match for the high-revving BRM and Climax V8 engines. Porsche quickly realized a complete redesign would be required once again to regain competitiveness. With no real justification for the excessive funds required, Porsche decided to call it quits after the 1962 United States Grand Prix. There never was an official announcement but the cars simply never reappeared. In two-liter form the flat-8 engine was quite successfully used for some years to come in a variety of sports cars.

During the 1962 season Porsche used three different 804 chassis. A fourth car was also constructed but never raced. It is believed that at least three examples have survived. Gurney's Rouen and Solitude winning car is among the survivors and has been part of a French collection for many years. Chassis 02, used mostly by Bonnier, was bought from the factory in 1964 by Tom Wheatcroft. Still in absolutely original condition, it can be admired in the Donnington Grand Prix Collection museum. The Porsche Museum owns the fourth car, which never raced in period. In recent years it has been given regular outings at events like the Goodwood Festival of Speed. 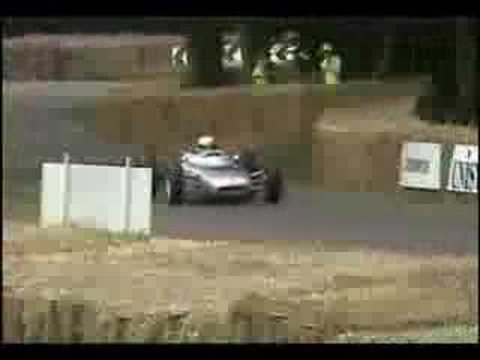