"The Longest Day" Is Released

The Longest Day is a 1962 war film based on the 1959 history book The Longest Day by Cornelius Ryan, about "D-Day", the invasion of Normandy on 6 June 1944, during World War II.

The Longest Day is a mammoth, all-star re-creation of the D-Day invasion, personally orchestrated by Darryl F. Zanuck. Whenever possible, the original locations were utilized, and an all-star international cast impersonates the people involved, from high-ranking officials to ordinary GIs. Each actor speaks in his or her native language with subtitles translating for the benefit of the audience (alternate "takes" were made of each scene with the foreign actors speaking English, but these were seen only during the first network telecast of the film in 1972). The stars are listed alphabetically, with the exception of John Wayne, who as Lt. Colonel Vandervoort gets separate billing. Others in the huge cast include Eddie Albert, Jean-Louis Barrault, Richard Burton, Red Buttons, Sean Connery, Henry Fonda, Gert Frobe, Curt Jurgens, Peter Lawford, Robert Mitchum, Kenneth More, Edmond O'Brien, Robert Ryan, Jean Servais, Rod Steiger and Robert Wagner. Paul Anka, who wrote the film's title song, shows up as an Army private. Scenes include the Allies parachuting into Ste. Mere Englise, where the paratroopers were mowed down by German bullets; a real-life sequence wherein the German and Allied troops unwittingly march side by side in the dark of night; and a spectacular three-minute overhead shot of the troops fighting and dying in the streets of Quistreham. The last major black-and-white road-show attraction, The Longest Day made millions, enough to recoup some of the cost of 20th Century Fox's concurrently produced Cleopatra. ~ Hal Erickson, All Movie Guide 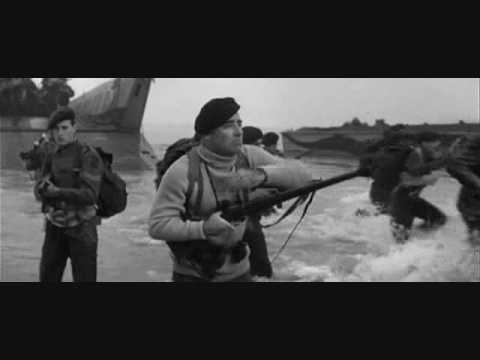