"Ride The High Country" Is Released

Ride the High Country is a noted 1962 western film.

It stars Joel McCrea, Randolph Scott, Mariette Hartley, Ron Starr and Edgar Buchanan. It was written by N.B. Stone Jr., Robert Creighton Williams (uncredited) and Sam Peckinpah (uncredited) and directed by Peckinpah, with a score written by George Bassman. In 1992, this film was selected for preservation in the National Film Registry by the United States Library of Congress as being deemed "culturally, historically, or aesthetically significant". A Region 1 DVD edition was released on January 10, 2006.

This Sam Peckinpah-directed feature outing was intended as the cinematic swan song for both Randolph Scott and Joel McCrea; while McCrea would unexpectedly emerge from retirement, this 1961 western serves as an excellent valedictory for both men. The time is the early 1900s, when the Old West was slowly and stubbornly giving way to the new. McCrea plays Steve Judd, an ex-lawman living on the fringes of poverty but maintaining his dignity and honesty. Hired to escort a gold shipment from the wide-open mining town of Coarse Gold, he engages his old pal Gil Westrum (Scott) to help him. But Gil hasn't Steve's integrity, and he and his young saddle pal Heck Longtree (Ronald Starr) hope to talk Steve into helping them steal the gold. En route to Coarse Gold, the three riders spend the night at the farm of a religious fanatic (R.G. Armstrong), whose daughter Elsa (Mariette Hartley in her film debut), chafing at her father's loud piety, is planning to elope with her boyfriend Billy (James Drury). The next day, Elsa insists on joining up with the group so she can marry Billy at Coarse Gold, leading to numerous complications and, of course, a final shoot-out that allows Steve and Gil to reconcile their differences and pave the way for the film's elegiac finale. Released at the tail end of the western genre, and virtually thrown away by MGM, Ride the High Country feels like an elegy for the western itself -- and Peckinpah himself would go on to revise western conventions with such later efforts as The Wild Bunch (1969) and Pat Garrett and Billy the Kid (1973). ~ Hal Erickson, All Movie Guide 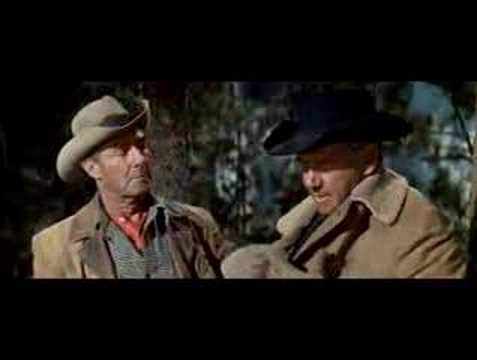