It was the first animated holiday special ever produced specifically for television (1962), and the only one until Rudolph the Red-Nosed Reindeer was first shown in December 1964. It later became the first episode of a TV series entitled The Famous Adventures of Mr. Magoo, in which the Mr. Magoo character became an actor in dramatizations of various well-known stories.

The credits for the cartoon state that it is "freely adapted" from A Christmas Carol by Charles Dickens. This adaptation mostly serves to shorten the story to fit the television special's one-hour time slot. The Ghost of Christmas Present appears before the Ghost of Christmas Past, and no reference is made to Scrooge's nephew Fred or the metaphorical children Ignorance and Want. Nor is Scrooge's sister Fan seen in the Christmas Past sequence. Two of the post-redemption scenes from the book are rewritten and combined, so that Scrooge visits the Cratchits instead of Fred, and threatens Bob (as a self-mocking prelude to raising his salary) at home rather than waiting to do so at work the following day. At the same time, however, the remaining scenes are remarkably faithful to the original, with characters often speaking the lines as Dickens wrote them, and little or no simplification of the language to suit a younger audience living over a century later. A number of references to Scrooge's (more accurately Magoo's) poor vision are sprinkled through the story, a nod to the Magoo character, but except for the beginning and ending pieces which occur outside the framework of the Dickens story, there are none of the usual Magoo catastrophes. 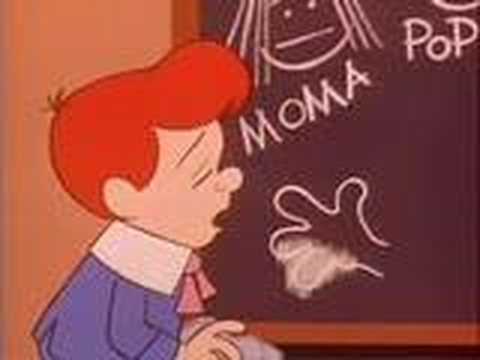