"The Manchurian Candidate" Is Released

It was directed by John Frankenheimer from an adaption by George Axelrod of Richard Condon's 1959 novel.

The central concept of the film is that the son of a prominent, right-wing political family has been brainwashed as an unwitting assassin for an international Communist conspiracy. The Manchurian Candidate was nationally released on Wednesday, October 24, 1962, at the height of the Cuban Missile Crisis.

An unusually tense and intelligent political thriller, The Manchurian Candidate was a film far ahead of its time. Its themes of thought control, political assassination, and multinational conspiracy were hardly common currency in 1962, and while its outlook is sometimes informed by Cold War paranoia, the film seemed nearly as timely when it was reissued in 1987 as it did on its original release. It opens with a group of soldiers whooping it up in a bar in Korea as their commander, Sgt. Raymond Shaw (Laurence Harvey), arrives to inform them that they're back on duty. These men obviously have no fondness for Shaw, and he feels no empathy for them. While on patrol, Shaw and his platoon are ambushed by Korean troops. Months later, Shaw is receiving a hero's welcome as he returns to the United States to accept the Congressional Medal of Honor, and several of the soldiers who served under Shaw repeatedly refer to him as "the bravest, finest, most lovable man I ever met." It soon becomes evident that after their capture by the Koreans, Shaw and his men were subjected to an intense program of brainwashing prior to their release. While several are troubled by bad dreams and inexplicable behavior, it's Capt. Bennett Marco (Frank Sinatra) who seems the most haunted by the experience. In time, Marco is able to piece together what happened; it seems Raymond Shaw was programmed by a shadowy cadre of Russian and Chinese agents into a killing machine who will assassinate anyone, even a close friend, when given the proper commands. On the other side of the coin, Shaw is also used for political gain by his harridan mother (Angela Lansbury), who guides the career of her second husband, John Iselin (James Gregory), a bone-headed congressman hoping to win the vice-presidential nomination through a campaign of anti-Communist hysteria. The Manchurian Candidate features a host of remarkable performances, several from actors cast cleverly against type. Frank Sinatra's edgy, aggressive turn as Marco may be the finest dramatic work of his career; Laurence Harvey's chilly onscreen demeanor was rarely used to s better advantage than as Raymond Shaw; James Gregory is great as the oft-befuddled Senator Iselin; and Angela Lansbury's ultimate bad mom will be a shock to those who know her as the lovable mystery writer from Murder, She Wrote. George Axelrod's screenplay (based on Richard Condon's novel) is by turns compelling, witty, and horrifying in its implications, and John Frankenheimer's direction milks it for all the tension it can muster. While Frankenheimer's career has had its ups and downs, The Manchurian Candidate and Seconds (1966) suggest that he deserves to be recognized as one of the most brilliantly paranoid American filmmakers of the '60s. Entertaining yet unsettling, both films indicate that things in the '60s were not what they seemed, with a resonance that still echoes uncomfortably in the present. ~ Mark Deming, All Movie Guide 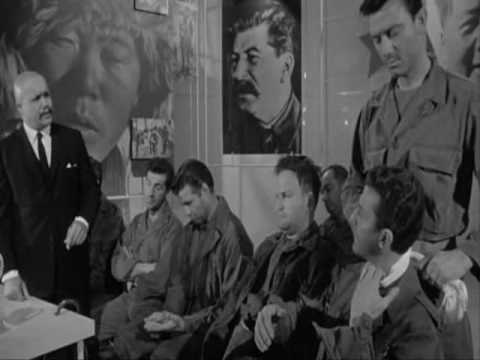