The Bay of Pigs Invasion (known as La Batalla de Girón in Cuba), was an unsuccessful attempt by a U.S.-trained force of Cuban exiles to invade southern Cuba with support from U.S. government armed forces to overthrow the Cuban government of Fidel Castro. Professor and the first post-revolution Prime Minister José Miró Cardona was chosen to lead the planned provisional government.

The plan was launched in April 1961, less than three months after John F. Kennedy assumed the presidency in the United States. The Cuban armed forces, trained and equipped by Eastern Bloc nations, defeated the exile combatants in three days. The bad Cuban-American relations were exacerbated the following year by the Cuban Missile Crisis.

The invasion is named after the Bay of Pigs, which is possibly inaccurately translated from the Spanish Bahía de Cochinos. The main landing at the Bay of Pigs specifically took place at the beach called Playa Girón.

The story of the failed invasion of Cuba at the Bay of Pigs is
one of mismanagement, overconfidence, and lack of security. The
blame for the failure of the operation falls directly in the lap of
the Central Intelligence Agency and a young president and his
advisors. The fall out from the invasion caused a rise in tension
between the two great superpowers and ironically 34 years after the
event, the person that the invasion meant to topple, Fidel Castro,
is still in power. To understand the origins of the invasion and
its ramifications for the future it is first necessary to look at
the invasion and its origins.

During the night of 16/17 April, a mock diversionary landing was organized by CIA operatives near Bahía Honda, Pinar del Río Province. A flotilla of small boats towed rafts containing equipment that broadcasted sounds and other effects of a shipborne invasion landing. That was the source of Cuban reports that briefly lured Fidel Castro away from the Bay of Pigs battlefront area.

At about 00:00 on 17 April 1961, the two CIA LCIs Blagar and Barbara J, each with a CIA 'operations officer' and an Underwater Demolition Team (UDT) of five frogmen, entered the Bay of Pigs (Bahía de Cochinos) on the southern coast of Cuba. They headed a force of four transport ships (Houston, Río Escondido, Caribe and Atlántico) carrying about 1,400 Cuban exile ground troops of Brigade 2506, plus tanks and other vehicles in the landing craft. At about 01:00, the Blagar, as the battlefield command ship, directed the principal landing at Playa Girón (code-named Blue Beach), led by the frogmen in rubber boats followed by troops from Caribe in small aluminium boats, then LCVPs and LCUs. The Barbara J, leading Houston, similarly landed troops 35 km further northwest at Playa Larga (code-named Red Beach), using small fiberglass boats. Unloading troops at night was delayed, due to engine failures and boats damaged by unseen coral reefs. The few militia in the area succeeded in warning Cuban armed forces via radio soon after the first landing, before the invaders overcame their token resistance.

At daybreak at about 06:30, three FAR Sea Furies, one B-26 and two T-33 jets started attacking those CEF ships still unloading troops. At about 06:50, and 8 kilometres (5.0 mi) south of Playa Larga, Houston was damaged by several rockets from a Sea Fury and a T-33, and about 2 hours later captain Luis Morse intentionally beached it on the western side of the bay. About 270 troops had been unloaded, but about 180 survivors who struggled ashore were incapable of taking part in further action because of the loss of most of their weapons and equipment. At about 07:00, two invading FAL B-26s attacked and sank the Cuban Navy Patrol Escort ship El Baire at Nueva Gerona on the Isle of Pines. They then proceeded to Girón to join two other B-26s to attack Cuban ground troops and provide distraction air cover for the paratroop C-46s and the CEF ships under air attack. 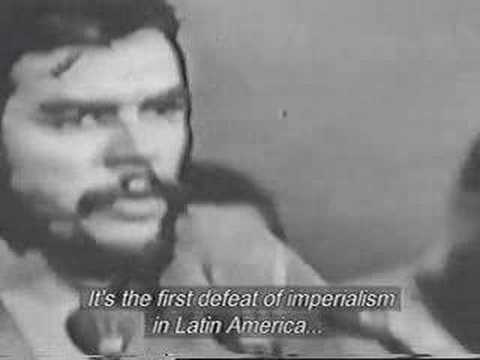