The 1961 Stanley Cup Final was contested by the Detroit Red Wings and the Chicago Blackhawks.

Two of some of the most notable athletes in Chicago sports history, Bobby Hull and Stan Mikita made their first Stanley Cup appearances. Hull scored two in the first game including the winner, and Mikita scored the winner in game five.

Both Bobby Hull and Stan Mikita made their first appearances in the Stanley Cup finals during the 1960-61 playoffs. Chicago stopped Montreal's consecutive Stanley Cup streak at five, defeating the Canadiens in the semi-finals. Chicago's win over Montreal was considered an upset, since Montreal had 12 more wins than Chicago during the regular season and the Habs were attempting to win a sixth straight championship. The Hawks then met Detroit in the final, and winning four games to two, celebrated their first Stanley Cup victory since 1938. Chicago's star defenseman Pierre Pilote led the team with eight points in the championship series.

The 1960–61 Chicago Black Hawks season was the Hawks' thirty-fifth season in the National Hockey League (NHL), and the club was coming off of a third-place finish in 1959–60, as they finished with a 28-29-13 record, earning 69 points, which tied the team records for wins and points in a season. Chicago faced the Montreal Canadiens in the NHL semi-finals; however, the Canadiens were victorious, sweeping the Black Hawks in four games.

Chicago faced the Montreal Canadiens in the best-of-seven NHL semi-final for the third consecutive season. The Canadiens once again finished on top of the NHL, earning 92 points, and had won five straight Stanley Cup championships. The heavily favored Canadiens took the series opener at the Montreal Forum, easily defeating Chicago 6-2; however, the Black Hawks fought back in the second game, evening the series out with a 4-3 win. The series moved to Chicago Stadium for the next two games, and the Black Hawks used their home ice advantage to take a 2-1 series lead with a thrilling 2-1 overtime victory in the third game; however, the powerful Canadiens stormed back in the fourth game, defeating Chicago 5-2 to even the series up once again. The Black Hawks stunned the Montreal fans in the fifth game, shutting out the Canadiens 3-0 on the road to return back to Chicago for the sixth game up 3-2 in the series. Chicago completed the upset, once again shutting out the Canadiens 3-0 in the sixth game to win the series 4-2, and earned a trip to the Stanley Cup finals for the first time since 1944.[5]
The Black Hawks faced the Detroit Red Wings in the 1961 Stanley Cup Finals. The Red Wings finished the season behind Chicago in the regular season, earning 66 points; however, they upset the heavily favored Toronto Maple Leafs to earn a spot in the finals. The Hawks took the series opener on home ice, as Bobby Hull scored two goals in Chicago's 3-2 win. The series moved to the Detroit Olympia for the second game, and the Red Wings responded with a 3-1 win to even the series up. The third game was back in Chicago, and it was the Hawks who took a 2-1 series lead by defeating the Red Wings 3-1; however, in the fourth game back in Detroit, the Red Wings evened the series up again, defeating the Hawks 2-1. Chicago easily won the fifth game in Chicago, winning 6-3 to take the series lead once again. In the sixth game in Detroit, the Black Hawks won the series as they handily defeated the Wings 5-1 to win their third Stanley Cup in team history, and the first since 1938. Pierre Pilote led all players in playoff scoring, earning 15 points, while Bobby Hull was just behind him with 14 points.[6]
As of 2008, the 1960-61 season is the most recent season in which the Black Hawks have won the Stanley Cup. At 45 seasons, this is the longest active Stanley Cup drought in the NHL. 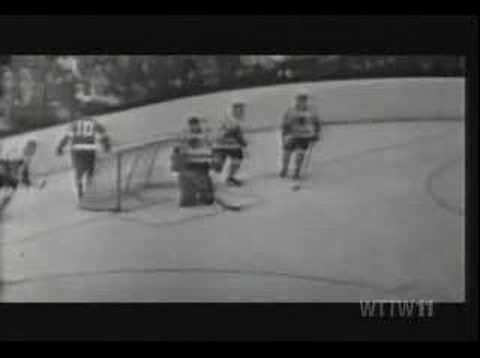