Ernie Davis of Syracuse, a big, rugged 6'2", 212-pounder, played left halfback and was his team's leading ground-gainer for three seasons.

He completed with 16 catches for 157 yards. He broke Jim Brown's career records in rushing (2,386 yards), yards gained all ways (3,414), scoring (220 points) and touchdowns (35). After graduating from college, Davis was signed by the Cleveland Browns for the (then) astronomical sum of $80,000. Shortly after signing and before he suited up for his first pro game, Ernie Davis was struck down by leukemia. He died as the first African American to win the Heisman Trophy.

Elected to the National Football Foundation and College Hall of Fame in 1979.

In the second closest vote in Heisman history, Syracuse star Ernie Davis edged out Ohio State bruiser Bob Ferguson by a mere 53 points. Davis managed to win only the East as five different players captured the sections. Alabama’s Pat Trammel won in the South; Jimmy Saxton of Texas in the Southwest and Sandy Stephens of Minnesota won the Far West. Davis became ill with leukemia the following summer and died May, 1963.

Ernest Davis (December 14, 1939 – May 18, 1963) was an American football running back and the first African-American athlete to win the Heisman Trophy. Wearing number 44, Davis competed collegiately for Syracuse University before being drafted by the Washington Redskins, then almost immediately traded to the Cleveland Browns in December 1961. However, he would never play a professional game after being diagnosed with leukemia in 1962. He is the subject of the 2008 Universal Pictures movie biography The Express, based on the non-fiction book Ernie Davis: The Elmira Express, by Robert C. Gallagher.

Davis played football for Syracuse University, and went on to gain national fame for three seasons (1959-1961), twice winning first-team All-American honors. As a sophomore in 1959, Davis led Syracuse to the NCAA Division I-A national football championship, capping an undefeated season with a 23-14 win over The University of Texas in the Cotton Bowl Classic. That same year, Elmira Star-Gazette sports writer Al Mallette coined the nickname for Davis, the "Elmira Express". Davis was voted Most Valuable Player of the 1960 Cotton Bowl Classic and the 1961 Liberty Bowl. In his junior year, he set a record of 7.8 yards per carry and was the third leading rusher in the country with 877 yards, having rushed 100 yards in 6 of 9 games.
Davis found racism prevalent in the American South during his Cotton Bowl Classic visit. Author Jocelyn Selim writes that at the banquet following the 1960 game, Davis was told he could only accept his award and then would be required to leave the segregated facility. Davis refused and his teammates, nearly all of them white, boycotted the banquet.[3]
A different account of the banquet is given by John Brown. He was Davis' teammate at Syracuse and on the Cleveland Browns, his roommate and a close friend. According to an article in the Houston Chronicle, all the players from the game attended the banquet. Brown recalls that the teams sat on opposite sides of the room. After everyone ate and the trophies were handed out, the three black Syracuse players, including Brown and Davis were asked to leave and were taken to another party in Dallas by local NAACP representatives. One Syracuse player, Ger Schwedes, recommended that the whole Syracuse team leave the banquet to show solidarity with their black teammates, but the suggestion was overruled by Syracuse officials. When the Chronicle asked Brown "whether the film is a truthful portrayal of his friend, Brown said... in short, no."[4]
Davis became the first black athlete to be awarded the Heisman Trophy, following his 1961 senior-year season at Syracuse University. President John F. Kennedy had followed Davis' career and requested to meet him while he was in New York to receive the trophy.[5] Later in 1963, when Elmira chose February 3 to celebrate Davis' achievements, Kennedy sent a telegram, reading:
“ Seldom has an athlete been more deserving of such a tribute. Your high standards of performance on the field and off the field, reflect the finest qualities of competition, sportsmanship and citizenship. The nation has bestowed upon you its highest awards for your athletic achievements. It's a privilege for me to address you tonight as an outstanding American, and as a worthy example of our youth. I salute you.[6] ”
During his time at Syracuse, Davis wore the same number, 44, as legendary Orangeman Jim Brown, helping to establish a tradition at the school that was acknowledged on November 12, 2005, when the school retired the number in an on-field ceremony. Davis also played basketball at Syracuse for one season 1960-1961.
While attending Syracuse, Davis was a member of the Sigma Alpha Mu Fraternity, a nationally recognized Jewish fraternity. Davis was the first African-American to become part of the organization not only at the Syracuse chapter, but for the national fraternity as a whole.[7]
Davis was inducted into the College Football Hall of Fame in 1979.
Ernie Davis was a member of The Pigskin Club of Washington, D.C. National Intercollegiate All-American Football Players Honor Roll.

Ernest R. Davis, commonly known as Ernie, was one of the best running backs ever to play college football. He followed the legendary Jim Brown to Syracuse University, where he led the Orangemen to a national championship in 1959, and in 1961 he became the first African American to be awarded the Heisman Trophy, given to the college game's best player. On the precipice of a promising career with the Cleveland Browns of the National Football League (NFL), Davis was struck with leukemia. He never played in a single NFL game and died on May 18, 1963, at the age of 23. He is remembered as a superior athlete and a young man who lived and died with dignity, grace, and compassion.

Davis was born on December 14, 1939, in New Salem, Pennsylvania, to Marie Davis. His parents were separated, and his father was killed in an auto accident before Davis was born. Young and needing a job, Davis's mother sent him to live with his maternal grandparents in Uniontown, Pennsylvania, when he was fourteen months old. Willie, a coalminer, and Elizabeth Davis already had twelve children but welcomed their young grandson into their home. Davis spent his early years playing sports with his older uncles.

When he was eleven years old, Davis's mother remarried and summoned her only child to Elmira, New York, to live with her. For Davis, who was quiet and shy, the transition was tough, but his athletic abilities, already apparent at a young age, helped earn him the respect of the kids at the local community center. Also, even in his youth, others noticed the special quality of Davis's character that radiated sincerity, enthusiasm, and friendliness. He played tackle on Small Fry football for the Superior Buick team. Although he was big for his age, he never delivered punishing blows and often would simply pick the smaller kids up and wait for the whistle to blow rather than slam them to the ground.

As a freshman at Elmira Free Academy, Ernie joined the junior varsity football team, but broke his wrist in the first game and was out for the rest of the season. However, it did not stop him from playing basketball. Having made the varsity team, Davis, with his wrist still in a splint, came off the bench in his first game to score 22 points. He also played first base and pitched for the baseball team. Although baseball was the weakest of his three sports, several professional scouts kept an eye on him. 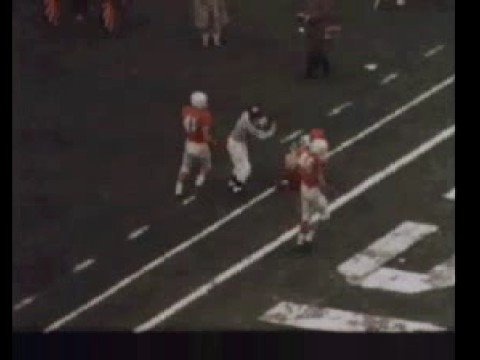