On October 21, 1960, American viewers were riveted to their television sets for the broadcast of the fourth and final debate between Vice President Richard M. Nixon, the Republican presidential candidate, and Senator John F. Kennedy, the Democratic candidate.

The first-ever televised debate between presidential candidates was held on September 26, 1960. An estimated sixty to seventy million viewers watched the first, and successive, debate(s)—known as "the Great Debates."

The first debate, broadcast by CBS, focused on domestic issues and provided for eight-minute opening statements from each candidate followed by thirty minutes of questions and answers and a combined total of ten minutes for closing statements. The first and last debates allowed two and one-half minutes for answers and one and one-half minutes for comments on questions directed to the opponent. The fourth debate, broadcast by ABC, focused on foreign policy issues, particularly U.S. relations with Cuba.

The second and third one-hour debates, televised from New York by NBC and ABC, respectively, followed a looser format with a news panel questioning the candidates on a variety of subjects. The second debate had neither opening nor closing statements by the candidates. The third debate was the first genuine "electronic debate;" the two candidates faced off from opposite coasts — Kennedy speaking from a television studio in New York and Nixon from Los Angeles.

The 1960 debates have been compared to the famous 1858 debates in the senatorial campaign between Abraham Lincoln and Stephen Douglas. However, the seven Lincoln-Douglas debates were held outdoors in the towns of several voting districts. Their debates—each lasting three hours—first one candidate spoke for one hour, then the second candidate spoke for an hour and one-half, and then the first candidate again for another half an hour, were attended by crowds ranging from 1,500 to possibly as high as 20,000 people.

The United States presidential election of 1960 marked the end of Dwight D. Eisenhower's two terms as President. Eisenhower's Vice President, Richard Nixon, who had transformed his office into a national political base, was the Republican candidate.

The Democrats nominated Massachusetts Senator John F. Kennedy (JFK). He would become the first Roman Catholic to be elected President, and he remains the only Roman Catholic to be elected to the Presidency. The electoral vote was the closest in any presidential election dating to 1916, and Kennedy's margin of victory in the popular vote is among the closest ever in American history. The 1960 election also remains a source of debate among some historians as to whether vote theft in selected states aided Kennedy's victory.

Moderator QUINCY HOWE: I am Quincy Howe of CB- of ABC News saying good evening from New York where the two major candidates for president of the United States are about to engage in their fourth radio-television discussion of the present campaign. Tonight these men will confine that discussion to foreign policy. Good evening, Vice President Nixon. 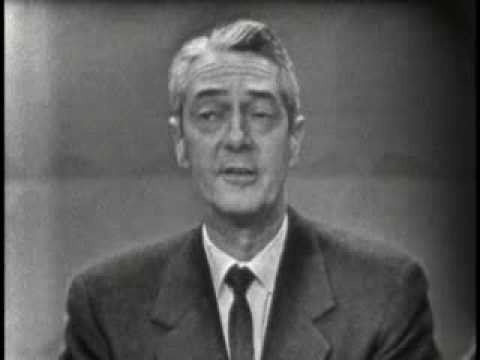